Tens of thousands of New Yorkers left the Big City and ran to Florida in 2022 – more than in any other year in history, according to figures from the Florida Department of Highway Safety and Motor Vehicles.

According to The New York Post, 64,577 New York residents exchanged their driver’s licenses for those in Florida last year.

The 2022 exodus constituted a 39 percent increase in those leaving New York and heading to Florida, compared to 2019, and was 45 percent higher than in the comparable period five years ago.

High taxes combined with the declining quality of life topped the list of complaints heard over and over again by a staffer at a Jacksonville Department of Motor Vehicles who spoke with The Post.

NYC Workforce Drops by 300K
New York City added 13,500 jobs last month, but according to data released by the state Labor Department last Thursday, the city has not yet recovered entirely from the pandemic, reaching only 88 percent of its pre-pandemic employment levels.

The city’s workforce has declined by 300,000 since February 2020, according to a report published Thursday by The New School Center for New York City Affairs economic and fiscal policies director James Parrott together with co-author L.K. Moe.

There were only minimal gains in the leisure and hospitality, construction, and retail sectors, despite a recent surge in tourism.

Quality of Life?
New York City began 2023 with an 18 percent rise in serious assaults, compared to the same period in 2022, according to the latest CompStat figures.

Rapes were up nearly 16 percent; robberies and burglaries increased by 9.4 percent and 5.5 percent respectively.

A law enforcement source told The Post that New York City police officers are contending with “an ebb and flow of constant recidivism that’s amplified” by criminal justice reforms – including the atrocious cashless bail reform laws and new evidence rules that prosecutors say are responsible for a rise in cases that are dismissed.

And as quality of life and other petty crimes continue to rise, New York City retailers are keeping higher quality products off the shelves – and those they do stock are kept behind locked glass cases.

All Locked Up
Walk into any pharmacy in the city and try to buy a face cream with retinol, for example. JewishPress.com did exactly that earlier this month, testing pharmacies in Brooklyn and Staten Island. At two pharmacies, the cream was not on the shelves at all. At the third store, it was displayed behind a locked glass cabinet door equipped with a button to call customer service.

It was the same story for products such as Tums, Mylanta and similar items – all in different aisles and secured behind the now-ubiquitous locked glass cabinet door.

United Bodegas of America (UBA) hatched a new strategy to keep products on the shelves — using chains and padlocks.

UBA president Ferdando Mateo told The Post that sometimes thieves come armed, and “the justice system is just not cooperating . . . if you fight back you take the risk of going to jail for protecting your property.”

In the Bronx, grocers are slipping steel chains through the handles of laundry detergent bottles and securing them with padlocks, according to The Post.

Thieves have been nicking at least $1,000 in laundry detergent a month, according to Jose Dario Collado, owner of Yankee Food Deli in University Heights, who spoke with the news outlet.

It was a similar tale of woe four miles away at Pamela’s Green Deli in Crotona Park East – chains and padlocks to keep the laundry detergent on the shelves.

But this is a problem that is not unique to New York: numerous pharmacies, grocery stores and other retailers are shortening their hours – or have tossed in the towel altogether and simply closed – as the shoplifting and “smash and grab” operations continue across the country.

According to a report last month by the National Retail Federation quoted by Fox News, such crimes have cost businesses about $94.5 billion.

The mammoth Target department store chain alone reported a loss of $400 million thanks to a 50 percent increase last year in shoplifting.

In New York City, Walgreens has been keeping its ice cream truly in the deep freeze, with chained-up freezers and locked up candy. 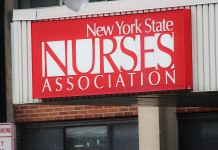