Just before 4:00 p.m. on Sunday, an alleged robber in Williamsburg grabbed an expensive chair outside of Osso Hardware – a Jewish-owned business – on Lee Ave.

A few blocks later, he dropped the chair, opting for a passerby Jewish lady’s purse. But she fought back and screamed, and he ran away empty-handed.

A few minutes later, an elderly Jew was walking out of Vien Shul on the corner of Taylor St. and Lee Ave when his nurse-aid draped his jacket containing his wallet and cellphone over his walking chair. The same alleged robber ran up and grabbed it.

The man told The Jewish Press he yelled, “Hey, what are you doing – my jacket!” and onlookers immediately called Shomrim. One Williamsburg resident who had been davening at the Vien Shul, Seth Perry, set out in pursuit of the man.

As the alleged robber approached S 4th St., a group of youngsters came to his aid and blocked the crowd that was now in pursuit of him. A fight ensued between Perry and some of the youngsters.

A witness told The Jewish Press it appeared to be a racially motivated brawl between primarily Jewish pursuers and Hispanic protectors. “These kids were chasing, taunting the people who were chasing the robber,” he said. During the scuffle, the witness – who said relations between Latinos and Jews in Williamsburg are usually peaceful – reported that he heard people yell, “Let’s get that Jew” and other comments he found “pretty traumatic.”

NYPD and Shomrim pursued the man as he made his way into an apartment building on Marcy Ave. He alluded capture, escaping out the back door of the building, then made his way to another building and ran inside and changed clothes in a relative’s apartment.

The police followed him into the apartment, prompting him to jump onto the fire escape. When he reached the sidewalk, he was surrounded by cops, but he somehow managed to escape once again. The cops finally caught and arrested him at the Williamsburg Bridge Plaza. 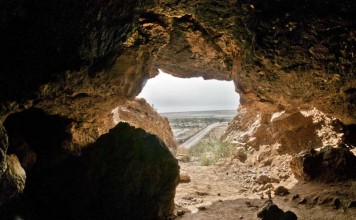