US Democratic Congress member Rashida Tlaib of Michigan slammed the State of Israel on Tuesday as a “racist state” while speaking in an interview on the program, “Democracy Now!” The lawmaker told viewers that Israel is to blame for the Palestinian Authority not being able to vaccinate its citizens.

Tlaib earnestly told viewers it is “really important to understand that Israel is a racist state, in that they would deny Palestinians like my grandmother access to a vaccine, that they don’t believe she’s an equal human being who deserves to live.”

OTOH, you can be sure if Israel setup vaccination tents in Palestinian territories, they’d be accused of secretly spreading smallpox https://t.co/rtXcywuBUP

Sadly, Tlaib seems to be confused between her role as an American Representative of her constituents, the people of the state of Michigan, and her role as the granddaughter of a woman living in the Palestinian Authority on a different continent, whose geopolitical location has no relation to the state she represents in Congress.

She also seems to have no understanding about the nature of the legal relationship between Israel and the Palestinian Authority, which are two entirely different entities, with separate security forces and two different sets of laws and even crossing points at borders, negotiated and agreed upon in the internationally recognized Oslo Accords in 1993.

Under that document Israel is not responsible for the health care of the citizens of the Palestinian Authority, who have their own system in place.

In the Oslo Accords, it states:

1. Powers and responsibilities in the sphere of Health in the West Bank and the Gaza Strip will be transferred to the Palestinian side, including the health insurance system.

6. Israel and the Palestinian side shall exchange information regarding epidemics and contagious diseases, shall cooperate in combatting them and shall develop methods for exchange of medical files and documents.

The Palestinian Authority has long been in violation of the Interim Agreements under the Oslo Accords with its lack of cooperation, not only in regards to economic and agricultural violations, but in terms of crucial medical violations as well.

Nevertheless, when the Ramallah leadership secretly asked the Israeli leadership for vaccines, Israel supplied them, and then the Palestinian Authority leadership denied it all ever happened.

The Palestinian Authority has just received 5,000 doses of the Sputnik V vaccine produced by Moscow, supported by research from Jerusalem’s Hadassah Medical Center team, and delivered through Israel.

Israel has no obligation to pay for the Sputnik V vaccines, however: the bill will have to be paid by the Palestinian Authority, or by donors who support the Ramallah government.

Just as Israel has no reason to take credit for Ramallah’s successes (or failures) as a government, so too Israel can take no responsibility for the Palestinian Authority leadership in providing for their citizens’ health care needs, any more than Israel can be expected to care for the health of the citizens of Japan, for instance.

Real governments take their responsibilities seriously and provide for their citizens at all levels.

But the real bottom line is that if the Palestinian Authority had invested its money in health care instead of paying salaries to terrorists to murder Israelis, the Ramallah government could afford as much vaccine as it needs. 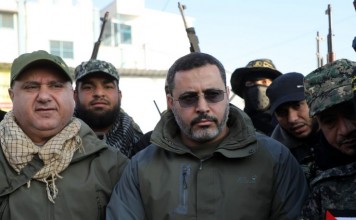