Leila Khaled played a critical role in two airplane hijackings as a member of the U.S.-designated terrorist organization the Popular Front for the Liberation of Palestine (PFLP). The Israeli Shin Bet considers Khaled as part of Jordanian command of the PFLP.


The Sept. 23 event, “Whose Narratives? Gender, Justice, & Resistance: A conversation with Leila Khaled,” will take place via Zoom. It will be hosted by SFSU professors Rabab Abdulhadi and Tomomi Kinukawa, the former of whom has a history of anti-Israel activism.

Khaled was one of the hijackers on TWA Flight 840 from Rome to Tel Aviv in 1969 and on El Al Flight 219 in 1970 from Amsterdam to New York City. She was released in both cases.

“They shouldn’t be turning their courses into vehicles for political or ideological indoctrination.”

“SFSU went to great lengths to restore trust with the Jewish community. Now the university risks throwing all that progress away, as Professor Abdulhadi invites an unapologetic murderer to speak to students,” Brooke Goldstein, executive director of the Lawfare Project, which previously sued SFSU to reach a 2019 settlement over alleged discrimination of students, told JNS. “Celebrating this notorious terrorist will only serve to create an even more hostile learning environment for Jewish students at SFSU.”

A university spokesperson told JNS that “an invitation to a public figure to speak to a class should not be construed as an endorsement of point of view.”

“Higher education and the college experience are an opportunity to hear divergent ideas, viewpoints and accounts of life experiences. An important outcome of the college experience is to learn to think critically and come to independent, personal conclusions about events of local and global importance,” continued the spokesperson. “A university is a marketplace of ideas, and San Francisco State University supports the rights of all individuals to express their viewpoints and other speech protected by law, even when those viewpoints may be controversial.”

Elman said that while universities should have academic freedom and present a diversity of ideas, they shouldn’t consist of having an agenda of “indoctrination.”

“Professors should challenge their students and present them with controversial ideas and points of view that could make some uncomfortable,” she said. “But they also have an obligation to cultivate an atmosphere of tolerance and shouldn’t be turning their courses into vehicles for political or ideological indoctrination.”

Pro-Israel and Jewish organizations called on SFSU to condemn this event.

“SFSU must unequivocally condemn and disassociate itself from this event, which features a member of a designated terrorist organization responsible for decades of deadly violence against Israeli civilians,” StandWithUs co-founder and CEO Roz Rothstein told JNS.

CAMERA on Campus managing editor Zac Schildcrout in a statement that “Leila Khaled committed acts of terrorism. Hijacking civilian flights for the cause of ending Jewish self-determination is not righteous, it is reprehensible. It is deeply concerning that an official academic program of San Francisco State University would glorify such actions. Is this the type of ‘academic’ programming that SFSU wants to be affiliated with?”

“Hijacking civilian flights for the cause of ledending Jewish self-determination is not righteous, it is reprehensible.”

AMCHA Initiative co-founder and director Tammi Rossman-Benjamin told JNS that “Leila Khaled is a convicted hijacker and the most famous member of the Popular Front for the Liberation of Palestine, a terrorist organization responsible for more than 100 terrorist acts such as bombings, armed assault and assassinations. The fact that the university is allowing Abdulhadi to host an official university event, in essence condoning murder and terrorism against Jews and Americans, where Khaled will spew hate and incite violence, is incomprehensible.”

Elman noted that “glamorizing female terrorists has become a trend on American campuses, and Leila Khaled’s image has adorned the posters, flyers, T-shirts and murals of anti-Israel campus groups in the past. It’s worth noting that on those occasions, university leaders have spoken out against it.

“Last spring, at San Diego State University,” she explained, “when the Women’s Resource Center included an image of Khaled in its newsletter, campus administrators apologized profusely, recognizing that it ran counter to the university’s values of promoting a safe, supportive and inclusive environment, and was ‘hateful and harmful’ to the campus Jewish community.” 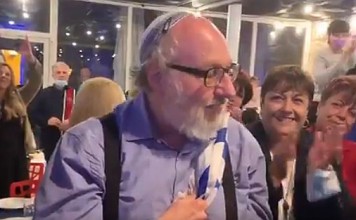