Senator Rand Paul (R-KY) has blocked the passage of a Senate bill that would quickly replenish Israel’s Iron Dome missile defense system, according to a report in Politico.


The bill was then sent to the Senate as a “hotline” – an expedited process that requires all 100 Senators to approve.

Democrats approved the hotline unanimously, but Paul objected, as he wants the funding to be offset from some other expense, such as aid to Afghanistan.

Senate Minority Leader Mitch McConnell (R-KY) is attempting to include the Iron Dome funding in the government funding bill. 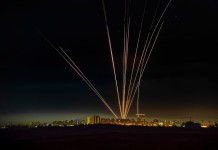