The United States issued a statement of support for Prime Minister Benjamin Netanyahu’s decision to bar two members of Congress from entering the country this week.

READ: Confirmed: US Reps. Rashida Tlaib, Ilhan Omar to be Barred from Israel

US Representatives Rashida Tlaib and Ilhan Omar are both vocal, active supporters of the Boycott, Divest and Sanctions campaign against Israel. They planned to visit the Palestinian Authority and Arab areas of Jerusalem beginning on Friday (August 16) together with a number of their supporters. The visit, billed as a “Congressional Delegation to Palestine” was paid for by the MIFTAH nongovernmental organization (NGO) and did not include plans on the itinerary to meet with any Israeli officials.

US Ambassador to Israel David Friedman pointed out in the statement posted to the internet Thursday evening that “the Boycott, Divestment and Sanctions (BDS) movement against Israel is not free speech. Rather, it is no less than economic warfare designed to delegitimize and ultimately destroy the Jewish State. Israel properly has enacted laws to bar entry of BDS activists under the circumstances present here, and it has every right to protect its borders against those activists in the same manner as it would bar entrants with more conventional weapons. 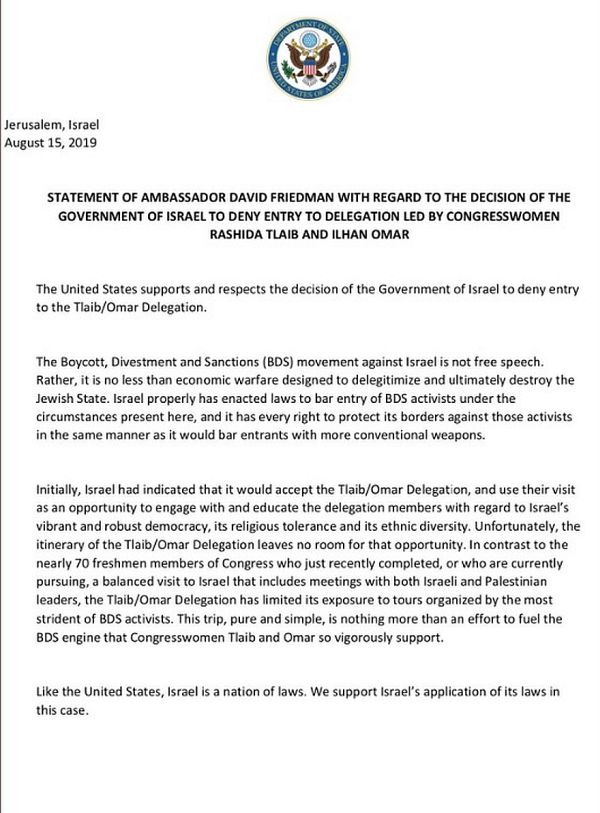 “Initially, Israel had indicated that it would accept the Tlaib/Omar Delegation, and use their visit as an opportunity to engage with and educate the delegation members with regard to Israel’s vibrant and robust democracy, its religious tolerance and its ethnic diversity. Unfortunately, the itinerary of the Tlaib/Omar Delegation leave no room for that opportunity. In contrast to the nearly 70 freshmen members of Congress who just recently completed, or who are currently pursuing, a balanced visit to Israel that includes meetings with both Israeli and Palestinian leaders, the Tlaib/Omar Delegation has limited its exposure to tours organized by the most strident of BDS activists. This trip, pure and simple, is nothing more than an effort to fuel the BDS engine that Congresswomen Tlaib and Omar so vigorously support.

“Like the United States, Israel is a nation of laws. We support Israel’s application of its laws in this case,” Friedman concluded. 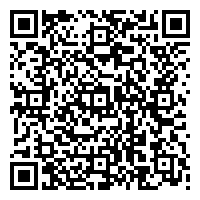