Next Tuesday, the 26th of Av, will mark the 40th yahrzeit of the Satmar Rebbe, Rabbi Yoel Teitelbaum.

The Rebbe was the son of the Sigheter Rav – Rabbi Lippa Teitelbaum, known as the Kedushas Yomtov– and the great-great-grandson of Rabbi Moshe Teitelbaum of Ujhel, Hungary, a pioneer in spreading the teachings of Chassidus to greater Hungary and the author of the classic chassidic text Yismach Moshe.


Following his father’s death in 1904, the young Rabbi Yoel was forced to leave Sighet as his older brother Chaim Zvi assumed the position of rabbi of the city and chassidic rebbe. Rabbi Yoel settled in Satmar but soon moved to Orsheva and then to Krole – both towns in Hungary – and served as communal rav in each town as well as a chassidic rebbe.

Even as a young rabbi, Rabbi Yoel attracted followers and disciples and developed a reputation as a Talmudic scholar, chassidic master, and communal leader. He also led large yeshivos wherever he resided.

The Rebbe, however, first came into his own following his brother’s premature death in 1927. His brother’s successor was his older son, Zalman Leib, but since he was only a young teenager at the time, many of his older brother’s followers looked to Rabbi Yoel as the real successor to the leadership of the Sighet dynasty.

He soon developed a large following in northern Romania and Hungary, and before long Rabbi Yoel was regarded as the leading chassidic rebbe in Hungary together with the Munkatcher Rebbe, Rabbi Chaim Elazar Spiro, known as the Minchas Elazar.

In 1928, Rabbi Yoel proposed his candidacy as rav of the large Romanian city of Satu Mare (Satmar) following the death of Rav Eliezer David Grunewald, the city’s previous rav. Satu Mare had well over 30,000 Jews, mostly of the Ashkenazi Oberlander type, which meant that Rabbi Yoel was not initially a welcome candidate for this rabbinate. His candidacy, however, took hold over the next few years and by the early 1930s he was elected Satu Mare’s chief rabbi.

The Satmar Rebbe started a large yeshiva with hundreds of students and soon embarked on a campaign to place relatives and disciples in key rabbinic positions in northern Romania (which caused not a few controversies as their interests clashed with other rabbis and chassidic dynasties).

The Rebbe escaped Nazi-Europe in World War II aboard the “Kastner train” and was liberated in Switzerland. He relocated first to Palestine and then to the United States in 1948. Here in Brooklyn, New York, the Rebbe rebuilt his community. Initially comprising several dozen followers, it grew to about 100,000 souls by 2010, by far the largest chassidic community in the world.

Rabbi Yoel sought not only to establish himself as a Rebbe but to act as an agent of continuity of Eastern European Jewish culture. He was not just concerned with the basics of Jewish life, such as kosher food and mikvaos. He wanted to recreate the culture destroyed by the Nazis. Thus, the language of instruction in all Satmar schools was Yiddish since the Rebbe felt Yiddish was the true cultural transmitter of European Jewry.

He also insisted on retaining Eastern European clothing and started a Yiddish newspaper, Der Yid, to propagate his ideology. The Satmar community is also modeled on the Eastern European shtetl with officers, dayanim, functionaries, etc.

The Rebbe was not interested in transplanting Chassidus to America. In fact, he viewed real Chassidus as inapplicable to American Jewish life. He believed true Chassidus had passed its prime, and what was needed now was a strong Orthodox communal structure, which could act as a bulwark against assimilation and modernization. He thus developed a Chasam Sofer ideology with the outward manifestations of Chassidus. Soon, smaller satellite communities like Poppa, Krasne, and Kashau established their own well-ordered communities following Satmar’s path.

We all know about the Satmar Rebbe’s anti-Zionist stance, but there was much more to him than his anti-Zionism. He built a large community, and his communal standards became the gold standard for other charedi communities. (And by being anti-Zionist to the extreme, he was able to resist cultural influences emanating out of Israel.)

He also organized a charity and welfare network that served not only his community but Jews from other walks of life as well. In this he was assisted by his rebbetzin, Mrs. Feiga Teitelbaum. The community also produced many religious functionaries who serve as shochtim, mashgichim, soferim, mohalim, and menakrim for the Orthodox Jewish community the world over.

For a while, his Yiddish school system was mocked by other charedi Jews who insisted on teaching in English, but by the end of the 1980s, many so-called yeshivish schools were rediscovering Yiddish. The same is true of Eastern European Jewish clothing, which was once looked down upon in America. Today, though, many have re-embraced this clothing thanks to the efforts of the Satmar Rebbe and others such as the Skverer Rebbe, Bobover Rebbe, and Klausenberger Rebbe.

Chazal inform us that Jews merited to be redeemed from Egypt because they did not alter their names, clothing, or language. The Satmar Rebbe placed a high value on all three.

There is so much more to write about this giant of a leader – zecher tzaddik vekadosh livracha – but space prevents me from doing so. Another time perhaps. 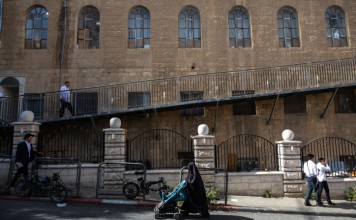