In the past 30 hours, Israeli security forces have been conducting an extensive manhunt for the perpetrators of the terror attack at Danny Spring near Dolev, north-west of Jerusalem, in which Israeli girl Rina Shnerb, 17, was murdered.

The IDF on Saturday night released a video showing the security forces expanding their search for the terrorists.

Arab media reported Saturday morning that security forces have arrested two young men from Ein ‘Arik, west of Ramallah, and another young man, from Ein Qiniya, also near Ramallah. According to local sources, the three suspects were pulled out of their beds and arrested. One of them is a released prisoner and a student at Bir Zeit University. The detainees were taken for questioning.

At noon, Hamas senior official Mahmoud al-Azhar was quoted by Arab media as saying: “There is no future for the occupation and its settlers in Palestine. I call for further acts of sacrifice in the West Bank, alongside the development of resistance tools in the Gaza Strip to realize our people’s goals to return to our country.”

The IDF spokesman said of Saturday: “IDF fighters, together with the Shin Bet and Israel police, continue to hunt for the terrorists who carried out the attack yesterday at the Danny spring near the Dolev settlement, in which Rina Shnerb was murdered and her brothers and father, Dvir and Eitan Shnerb, were injured.

Meanwhile, the condition of Dvir Haim Shnerb, who was injured in the attack yesterday, has improved, having been rushed to Hadassah Ein Kerem Hospital. His condition was described as stable Saturday morning, he is conscious and alert.

His father’s condition, Rabbi Eitan Shnerb, is now described as light. He told reporters: “We wanted to get into Danny’s spring. We called the center, and they told us it was OK to enter, and that the army would arrive at 11. We started down towards the spring below. My son Dvir is enrolled in a MDA medics course, and while we were walking he tells me to quiz him about tourniquets, and Rina also joined in. Then, when we got really close to the spring, we came across an IED (Improvised explosive device).”

“I have come across several IEDs in my life and I was saved, thank God, but this one caught us,” Rabbi Shnerb said. “It was a very large IED. Everything went black. I heard Dvir yell at me, and I was yelling, ‘Rina, Rina,’ but I looked down and saw she was no longer alive.” 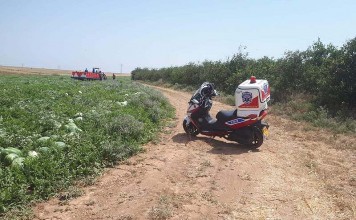