Despite the name of his latest album – Off the Record – Baruch Levine was more than happy to share details about his background and new album with me.

Most singers today rise through the ranks of choirs and musical families; Levine took a different path to his current superstar status. Growing up in Toronto, Canada, Levine lived vicariously through the musical talent of Uncle Moishy, Abie Rotenberg, and Shlomo Carlebach. He never appeared in the famous boys choirs, settling for singing in camp cantatas and an occasional color war.


Despite his many talents, his parents didn’t push him into the performance spotlight. As a teen, he started composing songs, and he took music lessons, but after only a few, he decided to stop as he didn’t have patience for repetitive scales and music theory and preferred to play by ear (a decision he regrets until today).

Later, he approached Canadian Jewish music songwriter and producer Zale Newman and offered him some songs for a new Yehuda! album and was thrilled when they were accepted. One of his songs, “Ki Lecha,” fetched him $125, and thus was launched the music career of one of the most prolific and talented singers and songwriters on today’s Jewish music scene.

Levine then started composing for other Jewish recording artists such as Abie Rotenberg, Sruly Williger, and Yaakov Shwekey. He enjoyed the balance of not being front-and-center but having his talents seen, appreciated, and enjoyed.

Then it happened. Producer Yochi Briskman approached him and asked why he didn’t record his own songs. That led to a six-album run with Briskman, with Levine singing his own creations. The impact was practically immediate and helped him financially as he got married and learned in kollel.

He dabbled in collaborative singles with other artists, and his huge 2006 breakthrough single – VeZakeini – came to him right after the birth of his son, as he sat at the piano in his parents’ home adjacent to the spot where his mother lights Shabbos candles. Levine attributes the success of the song to the optimistic and hopeful message it carries.

A few years ago, Baruch Levine had an idea: Why not gather and re-record the music he grew up on, songs that influenced him and, undoubtedly, countless others? So work began on Off the Record, an English-songs-greatest-hits-compilation. Forty-six songs, grouped by topic, in bite-size portions – just enough to relive the original and make an emotional impact.

A project curator was secured to ensure that the songs remained true to their source, and there were rules for the song selection process: no “full story” songs, there must be a mix of slow and fast tunes, and both young and older listeners must be satisfied. Doni Gross was hired to produce the album.

Gross, who didn’t respond to multiple requests for comment, is 10 years younger than Levine, but they were in camp together and collaborated on musical projects. “Doni Gross,” says Levine, “is uber-talented and was able to lend a fresh sound while staying true to the classics.”

The title of the album – Off the Record – popped into Levine’s head while out on a Shabbos afternoon walk. Here is a solo artist, he thought to himself, who writes his own songs, and here, “unofficially,” is what he listens to “off the record.” The pun, of course, is that most of these songs were first released on records.

Levine invited other artists to join him for this album, including Simcha Leiner, Joey Newcomb, Benny Friedman, and Rivie Schwebel, “modest artists, who are about the music, and not about themselves,” he explains. “The project was about the songs, not the artists or choir, or instruments.” Baruch says he couldn’t have been happier with the final product.

The medleys will have you dusting off CDs, cassettes, and records (perhaps vinyls?) to re-listen to your favorite songs from the ‘70s, ‘80s and ‘90s. And the beauty of it is, this album, with its fresh and engaging sound, will introduce a whole new generation to the songs and artists on which today’s singers grew up.

Baruch Levine lives in Waterbury, Connecticut, and has been a 5th grade rebbe for over 15 years. He is enjoying the new creativity that comes along with more time to compose that this pandemic has provided. He has also learned to appreciate how many people seek chizzuk and the difference he and his fellow singers make in people’s lives.

One word of caution: This album will leave you wanting more. Also, when you finish listening to the album, a thought might strike you: Why didn’t he include this or that song? Good news: Levine is already laying the groundwork for OTR2. But that’s off the record.

“Off the Record” is available on all streaming outlets, Mostly Music, and wherever Jewish music is sold. 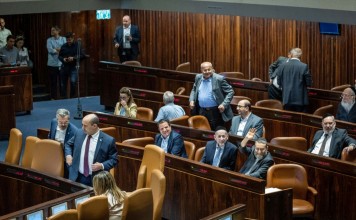