Earlier this year I was presenting my survey of Jewish art, “A Jewish Art Primer,” in a West Hartford, Connecticut synagogue and during the intermission a local artist, David Holzman, introduced himself to me. He relayed his rich and fascinating artistic background and then produced a portfolio of 8 black and white prints that he generously gave to me as a gift. As a tantalizing glimpse into recent work, they are truly amazing and I would like to share them with you.

Holzman spent 12 years, from 1995 to 2007, going through the entire Chumash and creating images for each parsha. At times many images were created; for Bereishis alone he made forty. In total he created over 500 black and white images from the Torah. While he maintains he was initially untutored in Jewish tradition, a quick glance at these works reveals a very sensitive reading of both the literal meaning and deeper repercussions of the biblical text.

As we are all aware, the Torah is overflowing with fascinating stories that cry out for visual interpretation. However, when an artist decides to give visual expression to seemingly straightforward halacha, we must especially take notice. Exodus 23:5 commands “Perhaps you will see the donkey of someone you hate lying under its burden, will you refrain from helping him – you shall surely help along with him.” Holzman’s image cuts to the chase of this moral and psychological dilemma. In your mind this person does not deserve help nor does his donkey. He has done you wrong and yet the Torah commands you to set aside your enmity and, by your generous assistance and compassion, effectively forgive him and forge the possibility of peace. What the artist recognizes by the tortured expression of the man in the foreground is that this command flies in the face of all normal human emotion. And yet the Torah demands this of us, as the Talmud in Shabbos 151b relates: “…he who is merciful to others, mercy is shown to him by Heaven, while he who is not merciful to others, mercy is not shown to him by Heaven.”

In all of Holzman’s “Torah For the Eyes” images he includes a selection and the location of the verse he is representing. His technique is a unique combination of traditional woodcut filtered through a minimal amount of digital processing. While the fundamental image is produced by printing a woodcut, the use of computer technology allows him to do multiple versions of each image, and easily store, manipulate and reproduce what ends up being a hybrid digital woodcut.

Holzman’s deceptively simple image of one of the most famous and climatic verses of Revelation, Exodus 19:17, in which Moses brings forth the people toward God and “they stood under the mountain” delicately balances the overwhelming merit of the Jewish people with the terror of the revelation experience. Our leader Moses advances in the center with his hands held high. He nervously glances upward while the people around him gesture this way and that, uncertain and confused. And yet they are surrounded by the blazing light of their courage. Above them is the looming mountain, silhouetted dramatically in what is simultaneously the awesome distance and/or the threatening suspension over their heads. The striated gouges of the woodcut define both the light that emanates from the people and the bottom of the hovering mountain.

Drama and narrative leaps are finely honed tools in this artist’s hands. “Zos haBracha” is juxtaposed with Deuteronomy 34:4 (an entire chapter later) in which we are told, “And Hashem said to him, “This is the land which I swore to Abraham, to Isaac, and to Jacob, to say, ‘I will give it to your offspring’; I have let you see it with your own eyes, but you shall not cross over to there.” The stern but hopeful opening text of the parsha crowns the image, visually anchoring the grim vision of Moses’ eyes surveying the very Land that he will tragically not enter. Graphic, abstract and yet descriptive of abundant crops, we see what he sees and deeply feel his loss. This kind of concise, brutal commentary is a rare interrogation and immersion in the biblical text by a simple black and white image. 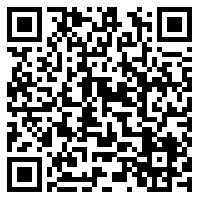