This is our matzah plate. What can you tell me? 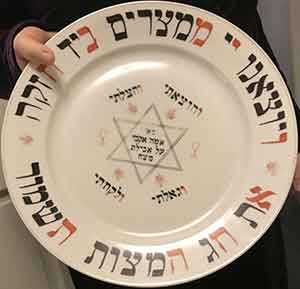 It still amazes me that after decades of being immersed in the field of antique Judaica, I am still shown things I’ve never seen before, like your matzah plate. This style of hand-painted black and red Hebrew lettering on porcelain was extremely popular in Germany during the early 20th century. It seems like every religious Jewish family had a dish like yours for havdalah, as an immense amount of those dishes appear for sale.

However, I have never seen other examples of your much larger porcelain plate, which apparently was used to hold matzahs (as opposed to a Seder tray, which I doubt this is, due to the prominent blessing for matzah in the center). Your dish bears a hallmark of the Hertel Jacob porcelain factory in Bavaria, and the styling of the mark dates it to between 1922-30.

The aforementioned havdalah dishes, when they appear on the market, typically sell for between $200 and $450 if they are in excellent condition. In a specialized auction, your matzah plate would have an estimate of $1,200-$1,800, and it likely would sell at the high end of that estimate. A dealer who would know how rare your plate is would price it in the $2,000-$3,000 range.

I found this oddity in the ongoing cleaning and organizing of life’s stuff. Does it have any value? What about its history?

I recognized your Purim gragger (noisemaker) as an example I’m familiar with that was made in NY or NJ during the late 1920s through the 1940s. Four types of this gragger were issued, one for each personality of the Purim story: Esther, Mordechai, Achashveyrosh, and Haman.

Your gragger is the most interesting of the group, as it curiously states “Mordecai the Jew.” Here, Mordechai resembles Shakespeare’s Shylock more than the humble, pious figure he is described as in Megillat Esther. He is depicted with a hooked nose, wears a luxurious fur stole, and gives a seemingly conspiratorial crook of the finger along with a wry smile. It is likely that this image was drawn and titled by a gentile. Bizarre! As to value, your gragger is lacking the wooden handle with metal noise mechanism. If it were complete with a bit less wear, it would sell for $50. In its present condition, perhaps $10.

I always enjoy your articles in The Jewish Press. I inherited a kiddush cup from my great-grandfather. I believe the dates on the cup are his birth date and his 40th birthday date. I’m not sure if the cup is of any monetary value but thought I would ask. Also wondering if you know what “Primrose” and “SBS” stand for. I believe they were societies my great-grandfather belonged to and may have been active in. He was born in Hungary. Any information would be most appreciated. 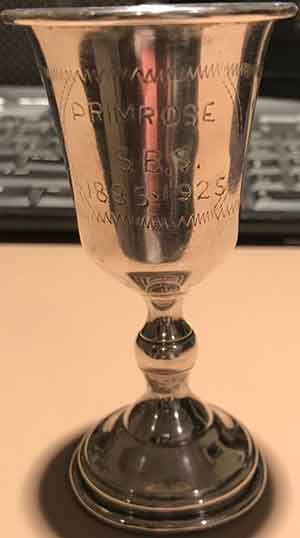 I can sympathize with how frustrating it must be to not know what “Primrose SBS” stands for. Luckily, I had a hunch what it meant, as it had to do with a landsmanshaft. A landsmanshaft was a mutual aid society of Jews that hailed from the same European town or region. There were hundreds of landsmanshaftn in America beginning in the late 19th century, which coincided with the great migration of Eastern European Jews to our shores. These societies would form so Jews could help one another out if a member was unemployed and could not provide for his family; the society would also often purchase whole blocks of sections in Jewish cemeteries for the eventual day that each member passed on to the next world.

As I’m sure you know, if you do an Internet search of “Primrose SBS,” there are no results. However, I assumed that the “BS” in “SBS” stood for “Benefit Society” or “Benevolent Society.” Sure enough, I got a match. “Primrose Sick Benevolent Society” was founded in 1885, and had an office at 348 60th Street in Brooklyn. In Flushing, Queens, at the Mount Hebron Cemetery, 218 people are buried in a gated section titled “Primrose Sick Benevolent Society.” I was able to locate the last surviving member of this society (their final meetings were held in the early 1970s). Unfortunately, he had no idea what the “Primrose” meant, but, like your great-grandfather, his father hailed from Hungary, so presumably, this society was for members from the same town or city in Hungary.

Back to your cup, which along with “Primrose SBS” has dates stating “1885-1925.” As we have established that the Society was founded in 1885, it is likely this cup was presented to every member of the Society at a banquet dinner for its 40th anniversary. Regarding value, it is quite minimal, as even profusely inscribed silver kiddush cups in Hebrew or Yiddish from a landsmanshaft sell for $50-$100. Your cup, which is minimally inscribed in English, is worth about $40.

What can you tell me about this piece? Is it actually pre-1948 as advertised, or a fake? I purchased it at auction. Thank you! I look forward to hearing from you. 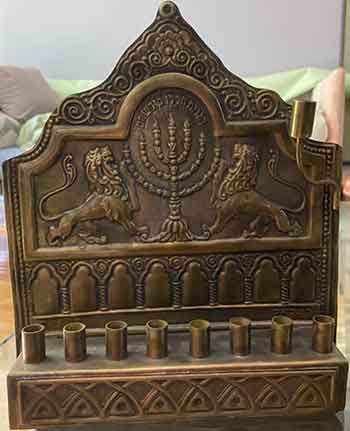 I’ll get right to the point: It’s a fake. Unfortunately, the field of antique Judaica is plagued by fakes and forgeries of every type imaginable. About 20 years ago, the original old dies for a number of sheet-brass Chanukah menorahs from the Bezalel School in Jerusalem were found, and since then, re-issues of various types of Bezalel Chanukah menorahs have been made, and too often, offered as an authentic original.

Now you are thinking, “How can you tell that just from a photograph?” A number of things set off alarm bells:

1) The oil holders. They are the wrong size (a bit small), are too simple in shape, and are each lacking the “double-lip” found on the original. 2) The placement of the servant light. It’s much too high. On an original, the placement is at the bottom, by the base. 3) The base. It lacks the four-cupped feet. Yes, it’s possible that all four feet have broken off and are lost, but there is no soldering mark by the corners on your example to indicate feet were ever there; the bottom of your base is even and sharp. 4) The borders. Look how crude and uneven the edges of the backplate are. Notice how the “hole” for hanging this menorah from a nail on a wall was never punched through! The “hole” is useless. 5) Finally, the design itself. It is not as crisp and deep in detail as it should be, particularly by the base.

Fake sheet-brass Bezalel menorahs are so prevalent that they have affected the values of authentic examples, as collectors are wary of purchasing a Bezalel menorah and later discovering it is a new forgery. Twenty years ago, an authentic, antique example of your Bezalel Chanukah menorah would have sold for around $1,200. Today, that has dropped to $500. Unfortunately, your new “re-issue” has no collectible value whatsoever. 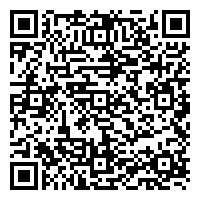