For this column, I thought I would share some interesting items relating to Purim that are in a museum or are from my personal collection. 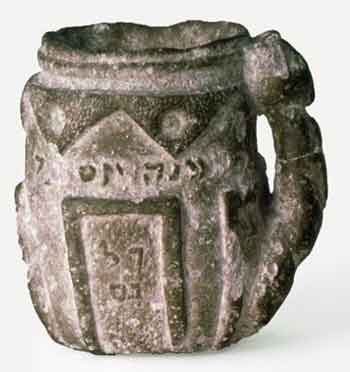 The oldest extant object used on this holiday is a hand-carved cup made of stone from Spain, dated 1319. It was used to collect funds for the poor on Purim, most likely in a synagogue. This is one of the very few surviving Jewish objects dating from before the 1492 expulsion of the Jews from Spain. There are engraved Judeo-Spanish inscriptions using Hebrew characters, including “rey Ahasveros y la reyna Ester” (King Achashveyrosh and Queen Esther), and “zechira del nes” (memory of a miracle).


This cup was gifted to the Musée de Cluny in Paris by Baron Alphonse de Rothschild in the late 19th century. It is on permanent loan from the Musée de Cluny to the Museum of Art and History of Judaism, also located in Paris. The inscriptions in Judeo-Spanish make this cup one of the oldest examples of the use of a language other than Hebrew or Aramaic on a Jewish ritual object. 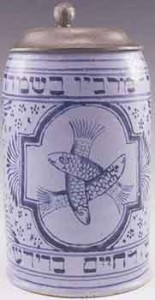 Speaking of cups, seen here from my collection is a most unusual painted and glazed ceramic mug with metal lid, whose form and purpose is generally associated with drinking beer. In the center is a depiction of three intertwined fish, as fish are the zodiac sign for Adar, the month in which Purim falls.

This fish motif is most often found on other European items for Purim, notably shalach manos dishes from Germany made of pewter and decorative wall hangings known as “Adar posters,” which were displayed during the holiday on synagogue walls and were used in Poland, Hungary, and Slovakia.

Sayings related to Purim are featured at the top and bottom of the mug in Hebrew, concluding in Yiddish “L’Chayim Bridis” (To life, brothers!). Charmingly painted ceramic items in this style are typical of Jewish objects from Bohemia (modern-day Czech Republic). The cup dates to about 1900. 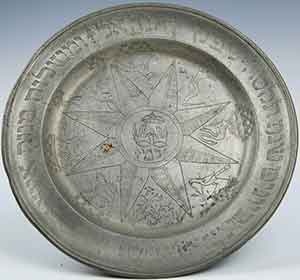 As I previously mentioned, pewter shalach manos dishes from Germany were apparently quite popular during the 18th and 19th centuries, and are most often found with a depiction of three intertwined fish in the center. Less often seen are these wares with other symbols or scenes relating to Purim, such as Haman leading Mordechai on horseback, or even Haman hanging from the gallows. This dish from my collection has the expected Hebrew verse about shalach manos; however, in the center is a depiction of hands in the position of when kohanim are blessing the congregation, and are underneath a crown, symbolizing “keter kehunah” (crown of the priesthood).

There are initials in Hebrew underneath these hands, which indicates that the sender of this dish was proud of his priestly heritage and instructed the engraver to illustrate this fact, with the initials letting the receiver know who sent this dish with foodstuffs on it, likely candied fruit and nuts. There are also animals depicted: a lion, dog, hare, fox, stork, swan, and peacock. On the rim is a Hebrew date of 1805.

We all remember as children waiting to spin our gragger or stomp our feet when the name of Haman was mentioned during the megillah reading. Finding an authentic antique European gragger for Purim is nearly impossible for the collector or art institution. All the purported 19th or early 20th century silver graggers I’ve seen were not old at all, but made by artisans to look old, with some bearing fake silver hallmarks. Others that appear to be convincing, made from wood with an engraved Hebrew word or two relating to Purim (more sophisticated examples are inlaid with bone/ivory or ebony Hebrew characters), are nothing more than forgeries.

The gragger itself is indeed old, as wooden noisemakers were used by firefighters and night watchmen back in the days of volunteer fire brigades to sound the fire alarm to others down the line in turn until the station was alerted to send help. These noisemakers were made in enormous numbers during the 19th century and are readily available for less than $50, so the temptation by the unscrupulous to alter one into a Judaic object of significant age is too great, apparently.

A rare exception to all this is the handful of known wooden graggers where a pair of three-dimensional carved heads are featured: one of Haman, the other of Hitler, each set on opposite sides of a wooden block, and when shaken, a connecting hammer would slam on the top of one or the other’s heads. One example, supposedly made in Poland, resides in the collection of the Jewish Museum of New York, which the museum attributes a date of manufacture of 1933. I’ve seen other examples of this Haman/Hitler gragger, but I believe them all to be modern creations.

Shown here from my collection is a lithographed tin gragger with wooden handle. Each side of this relatively small-sized gragger in cylinder form has a depiction of one person from the Purim story titled in English with a related Hebrew verse. Shown here is the beautiful Queen Esther. Aside from her, this gragger shows King Achashveyrosh, Mordechai, and Haman. This was made in America (likely New York City), sometime in the 1920s or 30s. Later versions of this gragger from the 1940s and 50s used the same graphics but changed the shape of the gragger to a flat rectangle. These examples featured just one of the Purim characters featured on the original, older gragger.

Finally, seen here from my collection is something made by non-Jews and primarily used by non-Jews, but I like it because it is somewhat Purim-related. This coin is known as a counter token or jeton. This particular jeton is from Germany, and is called a Rechenpfennige, translated as “counting money.” This piece and others like it were produced as counters for use in calculation on a counting board, a lined board similar to an abacus. They also found use as a money substitute in games, similar to modern casino chips. These counting tokens first appeared in late 13th century England, and gained popularity in use, so much so that by the 16th century, they were produced in mass quantities in other European countries such as Germany and France. The subject matter of these tokens was endless, from political depictions to the humorous. Included were scenes from the Jewish Bible, as many Christians were enthusiastic in learning and reading not just the New Testament, but writings that solely dealt with the Jewish people. 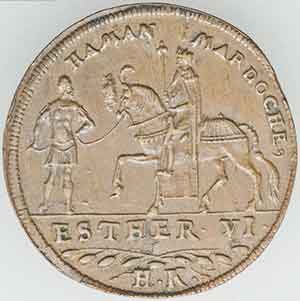 This token was made around the year 1600 by the minter Hans Krauwinckel in Nuremberg. One side shows Haman leading Mordechai on horseback, while the other side depicts Haman hanging in the gallows. Even for being 400 years old, this token is readily available for purchase at a cost of no more than a few hundred dollars; the price depends on the condition. This is the only “non-Jewish” token that I own, but I enjoy it nonetheless for obvious reasons.