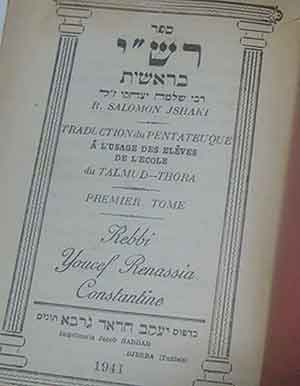 Born in 1871, R. Yosef Renassia was the chief rabbi of the Jewish community in Constantine, Algeria. He published over 130 books – including Judeo-Arabic translations of the Mishneh Torah, Mishnayot, Zohar, Rif on Talmud, Rashi’s commentary on the Torah, as well as several dictionaries and education books.


His Judeo-Arabic translations brought these classic writings to the masses and served as a force against the rapid modernization and secularization that was taking its toll on Algerian Jewry.

When Algeria declared its independence from France, the situation for Jews in the country became dangerous almost immediately and, joining the mass exodus of Jews, Rabbi Renassia made his way to Dimona, Israel in 1962, where he died a few short months later.

With the dispersion of North African Jewry and the abrupt exodus of Algerian Jewry, little unfortunately remains of the memory of this great man, whose lifetime achievements are truly remarkable and unparalleled.