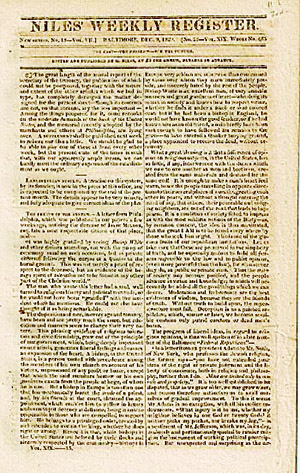 Niles’ Weekly Register was a national periodical published by Hezekiah Niles in Baltimore in the early 1800s. One issue from December 9, 1820 that I recently acquired contained some interesting mentions of Mordecai Manual Noah and the beliefs of two U.S. presidents.

Mordecai Manuel Noah (1785-1851) was an American newspaper editor, politician, playwright, diplomat, journalist, and Jewish leader. In 1825, Noah tried to found a Jewish state at Grand Island in the Niagara River, to be called Ararat. He purchased the land and a cornerstone ceremony was celebrated, but nothing ever came of his grand plan. An early Zionist, he believed Jews could only live free in a home of their own with self-governance.


In 1818, Noah delivered a speech at the consecration of the new building of Congregation Shearith Israel in New York and sent a copy of his speech to both John Adams and Thomas Jefferson. In this issue of the Niles’ Weekly, excerpts from both presidents responding to Noah appear:

Adams: “you have not extended your ideas of the right of private judgment and the liberty of conscience, both in religion and philosophy further than I do.”

Jefferson: “What injury is it to me, whether my neighbor believes in one God or twenty Gods? If neither picks my pocket, nor breaks my leg.” 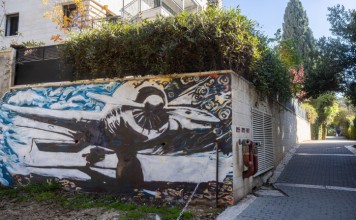