Ayelet Hashachar, a collection of songs and prayers published by a society named Shomrim Laboker in Mantua in 1612, came into my possession this week as part of an entire genre of such sefarim.

The early 1600s saw a surge of new societies in Italy and nearby areas whose members arose early in the morning for song, prayer, and bakashot. Each society had its own unique set of prayers and songs, and some of these bakashot (or maftirim, as they’re known in Turkish circles) are still sung today on Shabbat morning by Syrian, Moroccan and Turkish Jews. 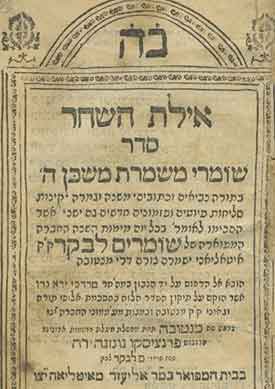 Not coincidentally, this period in history is when coffee was introduced to the masses in the Mediterranean area, giving them the ability to be alert and awake at hours of the day during which they would normally be fast asleep.

Many rabbis in this era discussed the new beverage. The Pri Chadash wrote, “One cannot attain presence of mind without the aid of coffee.” In Ginat Veradim, R. Avraham Halevi of Cairo wrote that “at sizable meals,” after a glass of wine was drunk at zimun, “another beverage called coffee” would be brought to restore one’s presence of mind.

In Zera Avraham, R. Avraham Yitzchaki of Jerusalem discusses the possibility of making the beracha Hatov Vehametiv on coffee like we do wine. In Mishnat Chasidim, R. Immanuel Hai Ricchi discusses whether a Jew can drink a coffee brewed by a non-Jew.

Coffee wasn’t the only reason societies of the kind described above proliferated during this period. An additional factor was the popularization of Kabbalah and the mass production of the Zohar and other kabbalistic works. Many Kabbalists at the time, including the Arizal, believed that from midnight through dawn was a particularly opportune time for study and prayer.

The success of these societies can be seen in the frequent reprinting of their books of prayers and their widespread use.