An exceedingly rare pamphlet I recently came across tells the story of what is believed to have been the very first yeshiva gedolah in the New World. Titled Torah Ohr and printed in 1895, it describes the history and enactments of the Yeshiva Ohr Hachaim, founded in Cheshvan 5656 (1895) in New York. Except for the contents of this publication, we know almost nothing of the existence of the yeshiva or its fate, despite the founder of the yeshiva being relatively well known and his other publications well received.

The rosh yeshiva was Rabbi Moshe Weinberger (1854-1940), a native of Hungary, who arrived in New York City in 1880. A talmid of the Chasam Sofer and R. Elazar Loew among other great Hungarian rabbanim, upon his arrival in the U.S. he served as rabbi in Scranton, then Philadelphia, followed by a pulpit in New York as rabbi of Bet Medrash Hagadol Anshei Ungarn. In 1887 he published HaYehudim Vehayahadut BeNew York, being a scathing review of the state of religious affairs in New York and attempting to discourage religious Jewish immigrants from arriving in the New World. By 1906, Weinberger left the rabbinate and entered the matzah manufacturing business, where he achieved great commercial success. 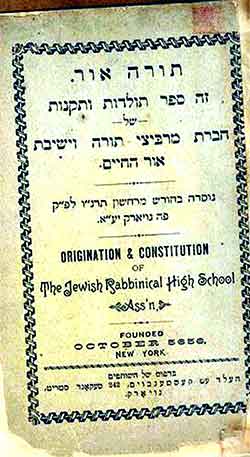 The publication Torah Ohr gives us much insight, though, into the operations and stated goals of the yeshiva. From the contents:

“All faculty, even those teaching the lowest level, must be knowledgeable in Mishnah and Talmud.”

“Overseeing the teaching staff will be a Rabbi and Head of a Bet Din who was ordained by the leading Torah scholars of the generation. He must serve as rabbi of a congregation in New York. He will deliver regularly scheduled lectures to the most advanced students in the Yeshiva, and to those who have completed the course of study taught by the rest of the faculty. These students who continue to study in the Yeshiva will receive appropriate diplomas, none will receive more honor than is due him. Those who become expert in Talmud and Codes and merit becoming rabbis in Israel, will be ordained by the Rosh Hayeshiva.”

“Women who wish to support the Yeshiva, and to become eligible for the benefits provided to members of the Association, must join a separate association called: Ezrat Nashim.”

“The Yeshiva has already started its work. It recently moved into palatial quarters at 306 E. 2nd Street. Each education level has its own room and hallway. The building is spacious and roomy, space has been allocated in accordance with aesthetic and hygienic considerations.”

“The number of students studying Mishnah and Talmud is close to 20. The total number of students in the Yeshiva is close to 80. What a glorious sight it is to see Jewish boys raised in this land – who previously knew nothing about [G-d’s] Torah, and for whom the ability to read Siddur and the prayers was considered the entire Torah – sitting before their teachers and discussing Jewish law, responding with clarity to whatever is asked of them, reciting by heart whatever they studied in Tanakh, Mishnah, and Talmud, and sharpening each other’s mind, with their pilpul and reasoned arguments. We trust that many more of the students in the lower levels will soon be ready to study Talmud. Within a year, then, the number of students studying Talmud will be 50.”

The translations of the Hebrew contents above are from “Yeshiva Or Ha-Hayyim: The First Talmudical Academy in America? published in Tradition by Shnayer Z. Leiman, Winter 1990. 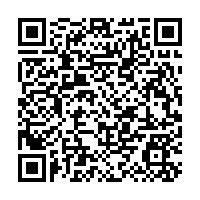