In 2001, David Ehrlich, an Israeli promotional filmmaker originally from New York, was down on his luck. He and his wife, Gail, a pre-school teacher, had recently moved their family from Jerusalem to Efrat, but the Second Intifada and a dip in the finances of non-profits had thrown a wrench into his business.

Ehrlich kept davening for a big production to get them out of the hole. He approached Reb Michal Dorfman, z”l, a Breslover Rebbe in Jerusalem, and asked him for a berachah for a particular production on which he was bidding.


“The rebbe wouldn’t give it to me,” recalls Ehrlich. “He said, ‘Hashem will give you what you need, not what you think you need.’

“Little did I realize that Hashem had already given me that berachah, and she lived with me in our home. The blessing was my wife and her talent and skill for both baking and organizing and ultimately being the driving force that got our cookies business off the ground. Gili’s Goodies was born out of desperation… and hashgacha pratit.”

What began as (literally) a cottage industry – with the Ehrlich’s kitchen, dining and living rooms, and den being the location of the industry – eventually moved into a converted laundry room at Kibbutz Rosh Tzurim, and today the Ehrlichs work round the clock churning out batches of cookies, cakes, and other goodies.

Pre-Purim is their busiest season because parents of students on gap year programs in Israel who send care packages to their children throughout the year make an extra effort before Purim. Last year 1,500 baskets of Purim delicacies were ordered online or via phone for delivery throughout Israel – about half of those to gap year students.

Full disclosure: I am honored to have played a small part in Gili’s creation. Gili’s Goodies began when we founded the Raise Your Spirits women’s theater of Gush Etzion. Our first production was Andrew Lloyd Webber’s beloved musical “Joseph & the Amazing Technicolor Dreamcoat,” and I directed it. We thought we would do two performances but they mushroomed to 12, and we’ve been going ever since with five subsequent original biblical musicals performed before almost 40,000 women.

In August 2001, we needed someone to run our concession stand and I remembered that Gail Ehrlich baked fabulous cookies. I asked David if his family would run the refreshment counter in the lobby before the show and during intermission. David, for whom I used to write video scripts, had helped me out once when I needed a loan and I thought, “What better way to return the favor?”

Their cookies were a huge hit and the rest is history.

For the Ehrlichs, though, the cookies are not just a business. They are also a vehicle to do chesed. In addition to sending gift baskets and birthday cakes all over Israel, Gili’s Goodies is heavily involved in projects that benefit Israel’s soldiers and people in need.

The Ehrlichs have been instrumental in sending gift packages to Shalva, a program for children with special needs, to the elderly and homebound through Yad Sarah, and to soldiers on the front during operations Cast Lead and Pillar of Defense, and other times.

For Purim 2007, they partnered with the Jewish Federation of Central New Jersey to deliver shipments containing packages of fresh-baked delicacies and wine to soldiers in Ramallah, where there were Palestinian riots.

thought about them and sent them these packages,” said Colonel Ben-Zion Gruber at the time, commander of the 14th tank brigade of the Israel Defense Forces. “This proves that in the end we really are one nation.”

Many of the soldiers to whom they deliver packages are “lone soldiers,” soldiers without any family in Israel. 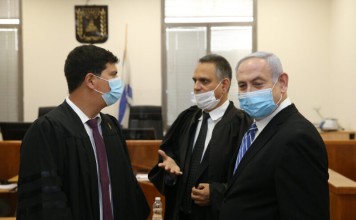