On April 15, 1912, the Titanic’s voyage across the Atlantic Ocean ended in tragedy when the Titanic struck an iceberg. The disaster, which occurred on the ship’s maiden voyage, claimed the lives of more than 1,500 of the 2,200 people aboard. The Titanic was the largest ship afloat at the time she entered service and its sinking and the death of so many of its passengers was shocking. 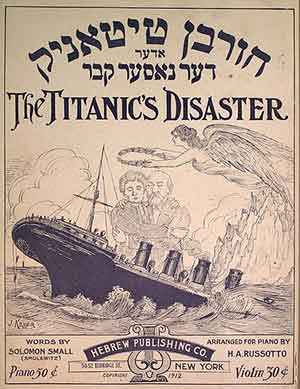 The response and impact on the general population and culture was swift and lasting, and within a few months’ time, publications came off the printer to commemorate the loss. I acquired one such publication recently: a Yiddish musical composition titled “Churban Titanik, oder der Naser Kever: The Titanic’s disaster.”

The words of the song were composed by Solomon Small (Solomon Smulewitz) and it was arranged for piano by Henry A. Russotto. The cover is illustrated by J. Keller and depicts the Titanic sinking with an iceberg nearby. Apparitions of Ida and Isidor Straus (co-owner of Macy’s) – who died in the tragedy – hover above the vessel.

Solomon Small (1868-1943) was a Russian-born Jewish singer, badchan, and recording artist, but primarily he was a composer for the Yiddish theatre. Born in Pinsk, he became a successful badchan and singer in Minsk and later moved to America, where he toured the country singing his over 500 original compositions.