While the Rambam is remembered today for his great rabbinic writings, for centuries his most-often printed works were his medical writings. This week I acquired Pirke Moshe, printed in Vilna in 1888, which is a collection of the Rambam’s remedies for various ailments.

Born in Cordoba, Spain in 1138, the Rambam and his family were forced to escape the region when he was 13 after it was captured by the Almohades, a fanatical Berber Muslim group. After wandering for many years – living in Fez, Morocco and for a brief period in Eretz Yisrael – he settled in Egypt in 1168. 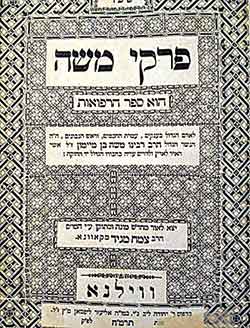 After the death of his brother David en route to India for business, and consequent financial difficulties for the family, the Rambam was forced to take upon himself the occupation of physician. Gaining widespread recognition, he was appointed court physician to the Grand Vizier al-Qadi al Fadil, then to Sultan Saladin, after whose death he remained a physician to the Ayyubid dynasty in Egypt.

The Rambam wrote his medical works in Arabic, and they emphasize moderation and living a healthy lifestyle. They describe many ailments such as asthma, diabetes, hepatitis, and pneumonia, and the Rambam was one of the first physicians to write about treating depression. In a medical letter to the nephew of Saladin the Great in Cairo, the Rambam discusses possible remedies for depression, including alcohol.

Ten known works of the Rambam on medical topics exist, and they have all been translated into many languages, including English. A traditional prayer used by many doctors and pharmacists to this day is attributed to the Rambam and attests to his devotion to his patients. The prayer begins:

“The Eternal Providence has appointed me to watch over the life and health of Thy creatures. May the love for my art motivate me at all times; may neither greed nor miserliness, nor thirst for glory or a great reputation engage my mind; for the enemies of truth and philanthropy could easily deceive me and make me forgetful of my lofty aim of doing good to Thy children.”

The influence of the Rambam on the medical field can be seen by the numerous editions of his works that were published in many languages throughout the centuries. Indeed, his fame as a healer was so great that in Egypt, as late as the 20th century, it was a custom in the Jewish community to carry ill patients to the old synagogue of Maimonides and leave them to sleep under the main prayer room.

When King Faud I of Egypt was seriously ill in 1935, the loyal inhabitants of the Jewish quarter borrowed some of the ruler’s clothing and took them to the prayer room where they kept them for a week. They were convinced that the subsequent improvement in the king’s condition was due to the blessing of the Rambam.