The beginning of cinema in Eretz Yisrael coincides with the commencement of modern Zionism. Eretz Yisrael is the site of virtually all Biblical stories and, as such, it is not surprising that the land quickly entered the plans of filmmakers at the dawn of cinema in the late 19th century. The first film shot in Eretz Yisrael is believed to be “Train Station in Jerusalem” (1896) by Alexandre Promio, a cameraman for inventors Auguste and Louis Lumière.

A few years later, Adolf Neufeld, a young Polish Zionist, suggested that the cinematograph be showcased at a Zionist exhibition, but unfortunately the idea was rejected. Neufeld persisted, however, arguing that film and phonograph records could be joined to create a “talkie” of the proceedings of the Fourth Zionist Congress (London, 1900).


Herzl, who quickly recognized that the new media could promote Zionism and document Jewish life in Eretz Yisrael, announced at the Congress: “The cinematograph is going to be a most efficient weapon of modern propaganda; let’s use it now.” He sent three cinematographers to Eretz Yisrael, none of whom actually knew how to operate a camera. The dismal result two years later was that the incompetent photographers produced some entirely useless exposed negative film.

As a result of this spectacular failure, the initiative for Zionist filmmaking essentially came to a halt for several years until Murray Rosenberg, a British Zionist who had taken up cinematography and established connections to the British film industry, returned to Eretz Yisrael in 1911, arriving on Erev Pesach with his movie camera.

He filmed many scenes, among them Jewish agricultural workers in the Galilee (including some on the famed Jewish agronomist Aaron Aaronson’s experimental farm in Atlit), a holiday procession in Tiberias to the grave of Rabbi Meir Baal Haness, a group of Turkish soldiers securing the Old City of Jerusalem, and the Kotel. He also filmed many prominent figures, including David Yellin (Hebrew writer, poet and educator) and Boris Schatz (founder of the Bezalel School of Art).

The spectacular results were collected in a film that was shown at the 10th Zionist Congress (Basel, 1911) to great acclaim. Rosenberg’s film is considered the first “Hebrew film” in that it met four criteria: Hebrew language, Hebrew plot, Hebrew producers, and a Hebrew studio. Although early films were all silent – the first feature film originally released as a “talkie” was “The Jazz Singer” (1927), starring the famous cantor’s son, Al Jolson – the Hebrew language played an important role in Hebrew cinema; as the famous Bezalel artist Meir Gur-Aryeh explained, “The sub-titles will light up the darkness with Hebrew letters.”

It was Yaakov Ben-Dov – “The Father of Hebrew Film” – who became the pioneering film chronicler of Zionist work in Eretz Yisrael. He was among the first to identify the propaganda potential of photography and film, which he used on behalf of the Zionist activists while working for the Jewish National Fund and Keren Hayesod. His silent films and newsreels were targeted at Jewish audiences in Europe and North America, and they were widely used as propaganda to promote Jewish immigration to Eretz Yisrael, fundraising among Jewish communities in the Diaspora, and worldwide political lobbying.

Ben-Dov dragged his cameras across deserts, swamps, agricultural fields, new towns, and kibbutzim – the entire length and breadth of the land. His documentary films, which uniquely portray the unfolding achievements of Zionism in “real time,” depict settlements and activities in Jerusalem, Tel Aviv, Rishon Le’Zion, and Old Jaffa; visits by Albert Einstein and Winston Churchill; the 1929 Hebron massacre; the funeral of Eliezer Ben-Yehuda; Herbert Samuel, the first British Commissioner to Eretz Yisrael (and the first Jewish ruler of the land in 2,000 years) watching a camel race; the opening of the Hebrew University of Jerusalem; the purchase of land for JNF; the draining of the Hula Valley; and early Zionists who pioneered the Third and Fourth Aliyahs.

Ben-Dov was particularly skilled at forming business and social connections, which facilitated the production of intricate projects, including the documentation of the first Hebrew towns in Eretz Yisrael in slides for the Panas HaKesem (Magic Lantern) and for an illustrated picture album (1912).

He always viewed his photographs and films more as documentation than art, and most cinema commentators agree, some cynically. For example, one critic characterized his films as “annual news summaries, with agriculture and settlement as padding.” This, however, by no means diminishes the historical importance of his films, and he is broadly credited with establishing the aesthetics of Zionist photography.

Ben-Dov (1882-1968) was born in a shtetl in the Ukraine, were he studied religious subjects in a cheder and secular subjects with private tutors. While still a teenager, he joined a movement devoted to the revival of the Hebrew language. He studied at the Academy of the Arts in Kiev and became a professional photographer before becoming influenced by Zionism and making aliyah, arriving in Eretz Yisrael in 1907 as part of the Second Aliyah and settling in Jerusalem.

In Eretz Yisrael, Ben-Dov began as a watchman in the orchards of Rechovot, taking photographs of himself proudly holding his rifle in front of the groves – a new, strong-Jew image that later pervaded his work. He continued his studies at the Bezalel School of Arts, supporting himself by working as a photographer and publishing illustrated postcards and albums of life in the land, some of which are illustrated here.

He became one of the first Bezalel graduates, after which he established Bezalel’s photography department and taught photography there. After Murray Rosenberg visited Bezalel in 1911, he became inspired to obtain his own motion picture camera. 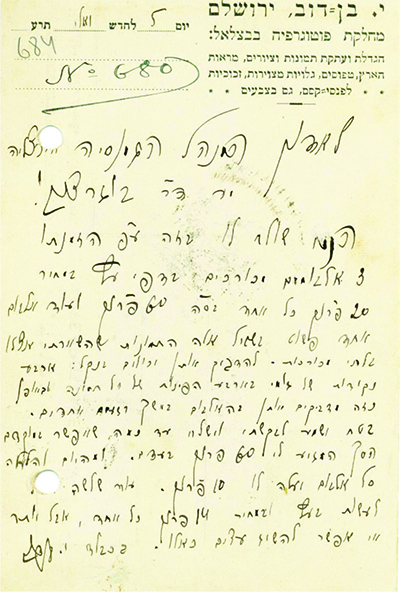 A year after this card was written, Ben-Dov published The Hebrew Colonies in the Land of Israel and, two years later, he opened a private photography studio specializing in portraiture. At the outbreak of World War I, he joined the Ottoman Imperial Army, obtained a commission as a medical photographer in the Austrian military hospital in Jerusalem, and was awarded a medal for his service.

He finally was able to secure his first “cinematographic machine” toward the end of 1917, probably from his Austrian military contacts, and he proceeded to found the Menorah Film Company. As its sole cameraman – albeit a highly-skilled one who had developed a keen understanding of the art form – he began filming important historical events and made his first documentary, “Judea Liberated,” in 1918.

The first of 34 events that he recorded on the two-hour film was “the British army entering Jerusalem led by General Allenby, on Chanukah 5678, 11th December 1917.” The film included images of the Jewish Legion in Eretz Yisrael and Legion founder Ze’ev Jabotinsky in uniform; Chanukah festivities in Jerusalem schools; craftsmen in workshops; and public gatherings.

It premiered on the first anniversary of Allenby’s liberation of Jerusalem but, sadly, only a few shots from the film survive; Ben-Dov actually brought a claim against a distributor who lost a negative of the film. The interest in the film was such that he subsequently received financial support from official Zionist bodies, which came to recognize the value of his work.

After the liberation of Jerusalem from Ottoman rule in 1918, Ben-Dov also focused on communal matters, including organizing the artisans’ center and representing them on the First Jewish Municipal Council, in which capacity he was invited to be present at the official announcement of the Balfour Declaration. He was a founder of Talpiot, a Jerusalem neighborhood, and initiated other projects for building new suburbs in and around Jerusalem.

Ben-Dov shot some of the earliest footage of an archaeological expedition, the excavation of the Hammat Tiberias Synagogue (1920). The footage was used in “Shivat Tzion” (“The Return to Zion”), a 70-minute film. The JNF renamed it “Eretz Yisrael Hamitchadeshet” (“The Land of Israel Renewed”) and screened it at the 12th Zionist Congress in Carlsbad (1921).

He next produced “Eretz Yisrael Hamitoreret” (“The Land of Israel Awakens,” 1923), the first film to be shot exclusively for the JNF. It was also the first Hebrew film using actors and containing Hebrew dialogue. Filmed at the beginning of the British Mandate, it tells the story of Bloomberg, a wealthy Jewish-American merchant who, after spending a day in Jaffa, is persuaded by his guide, Penueli, to devote an additional month to traveling the breadth of the land to gain an understanding of the land and its people.

Featuring 220 different scenes, about 70 depicting the Jezreel Valley, it is at its essence a “feel-good” film, as Bloomberg sees, among other things, singing farmers, muscular laborers hard at work, dancing pioneers, and fighters and defenders all working together to create a Jewish homeland, an obvious exercise in propaganda and idealization with nary a hardship or mosquito to be found. At the conclusion of the trip, Bloomberg promises to return to Eretz Yisrael at his earliest opportunity and makes sizable donations to JNF to help fund aliyah.

The story was written by William Topkis, an American Zionist who arrived in Eretz Yisrael just after the JNF signed Ben-Dov to an exclusive six-month contract to help the first licensed Jewish tour guides gain a foothold in the then Arab-dominated market. Thus, the film symbiotically served the interests of all concerned: Ben-Dov, the filmmaker; Topkis, the writer and businessman; and the JNF. The film proved extraordinarily successful, notwithstanding disdainful adverse reviews by critics. Jewish communities around the world – who, after all, were the intended target of the film – flocked to see the film and, so enamored by what they saw, gave generously to support the JNF.

Ben-Dov produced some 800 postcards, six photographic albums, and 30 films (most of which have been lost), and he continued filming until the early 1930s, when “talkies” became all the rage and his inability to acquire sound equipment ended his career. He ultimately agreed to sell most his material to the Central Zionist Archive, which has preserved it to this day.

Upon his death, his daughter, the painter Chana Ben-Dov, transferred the remainder of his estate to the Israel Museum. His films are preserved in various archives around the world, including the Steven Spielberg Jewish Film Archive. He was appointed a “Yakir Yerushalayim” (honored citizen of Jerusalem) in 1966, and his work has been exhibited at the Israel Museum. 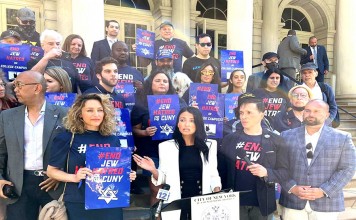