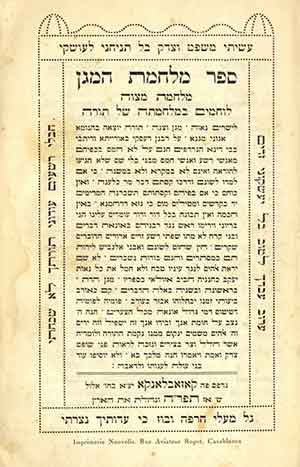 A pair of sefarim I recently acquired tell both sides of a tale that shook the rabbinate in Morocco in the 1920s, and whose effects were felt for many years afterwards. One is titled Magen Hadat, published by R. Hananiah Habib Azoulai in 1925, which criticizes a psak of the Casablanca beit din, and the second is titled Milchemet Hamagen, published the same year, which defends the beit din’s decision.

The psak concerned a very wealthy elderly Jew who passed away childless, leaving his wife in need of yibum or chalitzah. The beit din allowed one of the brothers – an elderly man who was already married – to perform yibum without intending to consummate the marriage or live together with the woman as a married couple. By performing yibum, though, he inherited the vast fortune of his deceased brother, which left the other siblings with nothing, much to their dismay and protest.


The validity of the yibum was brought into question almost immediately by R. Azoulai, a Jerusalem native who served as an emissary for the Ashkenazi community of Jerusalem and held rabbinic positions in Paris, Belgium, and Casablanca. In Magen Hadat, he fiercely attacks the beit din of Casablanca, claiming that its psak was driven by ulterior motives. He also argues that the beit din lacked the authority and ability to govern such matters.