I took my 15-year-old daughter to Kever Rachel for her birthday this week. While swiftly driving along the wondrous new roads, I had a few moments to reflect on my past visits to Kever Rachel over the last 30 plus years.

I visited just days before this daughter’s birth. It was her oldest sister’s 10th birthday. I had been a couple of days overdue and big sister was hoping her sibling would be born on her birthday. My husband and I had decided a trip to Kever Rachel was needed for extra tefillah in regards to the birth. In addition, we were in a turmoil regarding our oldest son’s particular yeshiva choices. For our oldest daughter, it was a treat to spend time with both mother and father.

In those years, following the violence of the early millennium, the only way to reach the kever was via armored buses with an exact schedule.

Access and the very appearance of Kever Rachel have changed dramatically over the decades. I have tried without success to conjure up an image of my very first experience there. Was it in 1983 while on a tour with NCSY? Or 1985 during my seminary year? Either way, I only recall the quaint stone building in the Arab city of Bethlehem. Our tour bus probably just dropped us off at the entrance. I recall seeing the plaque from Sir Moses Montefiore in his dedication of the building, the bumpy stone floors with the two steps leading down to the monument draped with a dark velvet embroidered covering.

The look and feeling of the building inside and out stayed pretty much the same for the ensuing 15 years or so. After we purchased our first car, the occasional trip to the kever would happen. In those years, there was no speeding highway; once we reached Bethlehem, we just parked our car on a side street and walked over. As we glanced at the Arabic writing on the street signs, we gave little thought to our actions. Once our kids began to join us, we would combine a visit to Kever Rachel together with an outing to the glorious Park Gilo, a 10-minute drive away.

One memory stands out. It was January 1991, the Gulf War had just broken out. The country was on standby with SCUD missiles flying over our heads nightly. My husband and I were recuperating from bouts of hepatitis and mono. While sitting in our home, watching over our two little boys, ages 3 and 1, it hit us: we had a mission. Mama Rachel needed us. She needed us to come daven over the fate of Klal Yisroel. With no further hesitation, we grabbed our gas masks, the boys’ gas tents, some drinks and nosh and off we drove to our destination. When we arrived, the attendant looked like he had seen an apparition. Looking at his shocked face, I simply declared, “Mama Rachel needs us to daven.” He nodded his head vigorously while we searched for sifrei Tehillim.

As the violence of the Intifadas reared in all their ugliness, access and the structure of the kever evolved dramatically. A simple drive over was no longer possible. In fact for a couple of years, access was nearly cut off. Tzidkonios of our generations could not stand to see this occurring and endeavored to make Mama Rachel accessible once again – hHence the age of the armored buses. Instead of the quaint stone building, a mammoth structure was built around the original small building, assumingly to keep the worshippers protected in the hostile environment encircling the kever, yet it made us regulars feel like we had entered into a foreign country. Relieved to be able to go daven by Mama Rachel once again, we felt the emptiness of golus in our new “secure” environment.

When Kever Yosef in Shechem was desecrated a few years later, some of the remaining holy items were brought over to the building surrounding Kever Rachel. I heard that Rav Kook, rav of Rechovot said that we should all go request mechila from Mama Rachel for the destruction done to her son’s kever.

Another sobering artifact found at Kever Rachel is an ornamental wall hanging. It was sewn from the wedding gown of Nava Applebaum, who was murdered with her father Dr. David Applebaum the night before her wedding as they enjoyed a few quiet moments together in a local café. Dr. Applebaum is noted for starting Terem, a revolutionary first aid center, before revamping the Shaarei Tzedek Emergency Room. One can still see the large picture of Dr. Applebaum in front of the ER (with many Arab patients sitting beneath it).

Bus service to the kever became more readily available and then, lo and behold, private drivers were allowed entrance. The authorities built a cement wall around the access road that literally reaches the sky. No more rocks and crude bombs being thrown down. As it became easier and easier to reach the kever, it became a monthly ritual of mine to get there.

Today the speeding Begin Highway takes me from my house to the kever in a mere 15 minutes. I do wonder at this incredible road that travels from Kever Rachel, just south of Jerusalem, all the way to Kever Shmuel HaNavi, north of the city. I am sure there is deep meaning to all this, but for me it’s just another fact confirming that Moshiach is on his way, preparing the roads for the anticipated aliyat haregel.

I listened to my daughter tell me about recent events in her life as I drove through the barrier leading up to the compound. I wave a cheery hello to the faithful soldiers before parking the car. The parking lot is spacious and yet it is almost always full. Who would have ever imagined that it would be so easy to travel and park near the kever?

Once entering, I looked for a quiet corner to say some Tehillim and make my personal requests. Deep in trance-like tefillah, sometimes I am able to delve into the most vulnerable holes of my neshama. After intense communication with the One Above, I look around the room with new eyes while I scan for my daughter in the corner near the monument, head looking into her Tehillim. I motioned for her to come with me to the car.

Mama Rachel, how long will this golus continue, I wonder. We tell you to cry for your children. I look forward to the day when we won’t enjoy the ease of visiting your kever, as you will be with us once again.

The 11th of Cheshvan is also the yahrzeit of Risa’s husband Chaim Yechiel ben Yaakov, who was a victim of the Har Nof massacre. 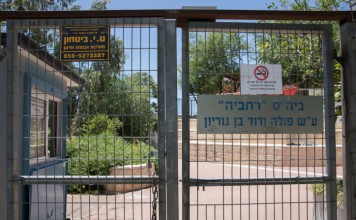