This past weekend was supposed to be a friends and family bar mitzvah at Congregation Bnai David in Los Angeles, celebrating my son Gideon’s passage into manhood.

It was destined to be a little special because Gideon, for most of his life, has been in public school in a special education class for kids with high anxiety and learning challenges, and his formal Hebrew training ended early in elementary school. In addition, his anxiety levels were such that my wife and I could not be sure that he would be able to get up there in front of 500 people and complete his haftorah.


I remember thinking how nervous I was at my bar mitzvah. How much more so for Gideon, whose shyness and reserved nature dominated most of his childhood. I thought initially that Sari and I would stick to the path of least resistance and just teach Gideon the berachos. But then we determined that, with enough preparation, Gideon could be confident to sing the blessings and the haftorah of Parshat Lech Lecha. Together with a couple of tutors, I spent over a year helping Gideon to improve his Hebrew skills, learn the cantillation, and get used to singing out loud.

What we couldn’t really prepare for, though, was the day itself. Would he have enough confidence in his ability to overcome his anxiety of performing in front of a crowd?

On the big day, as the congregation waited silently for Rabbi Yosef Kanefsky to call him up to the Torah, Gideon suddenly curled up and buried himself in his seat. I wasn’t sure what to do. Sari said, “Pick him up” and see what happens. (We had already agreed in advance that if he wouldn’t go up or if he froze while up there, I would read the blessings and everything would be fine.)

What happened next was so rewarding. I helped a very reluctant Gideon out of his seat to the stairs of the bimah in the center of the synagogue. I calmly draped the tallit from my great-grandfather Jack Ciment (whom I am named after) over Gideon. I also attached a silver tie clasp from Gideon’s zeide, Yale Harlow, to secure the tallit.

Gideon, who had previously been resistant and hesitant, immediately started to stand straighter and prouder. His face projected confidence and certainty. All the planning and preparation was not for naught. He was ready to make the blessings that would transform him from a child into an adult.

With the encouragement of his cousin Binny (who was just bar mitzvahed in June in Florida) by his side, we all walked up the stairs to the waiting Torah. Gideon loosely gripped one of the Torah handles, kissed the tzitzit in his hands, and with a bit of trepidation managed to recite his maftir blessings.

Immediately after maftir, this typically quiet and reserved child proudly led a dancing conga line through the aisles, high-fiving people and smiling, proudly exclaiming, “I crushed it” even before he started his actual haftorah (because he could already envision his success).

I stood with him during his entire haftorah reading, rarely prompting him (because he really did know it) and it was not just exceptional; it was better than he had ever practiced. The very long year of anticipation quickly became an immediately satisfying feat of accomplishment which was capped by the obligatory pelting of candies.

As I look back at the journey to Gideon’s ultimately stellar performance, there is a particular event that stands out. A few weeks before the bar mitzvah, Gideon had been looking at new talleisim for weeks, and when he saw my grandfather’s very old, yellowed and frayed tallit that had been sitting forgotten in a drawer for almost 50 years, he said, “That’s the one I want.” It seemed as if Papa Jack was going to accompany Gideon and give him the courage and strength to go beyond even his own expectations.

In addition to all the preparation, our son had one more thing going for him to guarantee his achievement – the legacy of his name. He was named after Gideon, the ordinary man turned biblical judge, whose name is synonymous with overcoming insurmountable odds. Gideon had an unwavering faith in Hashem and realized that if he had confidence in his plan, Hashem would help him succeed.

Hasn’t this been the secret of the Jewish people? Aren’t we consistently challenged beyond belief? Yet, like the old Timex commercial, we take a licking, but keep on ticking. Our job as parents is to teach our children that Hashem is on our side and, with the right level of commitment, all challenges can be overcome. We need to highlight role models like Gideon and Nachshon, who have taught us that we need to make the first move before G-d will reveal himself.

Didn’t Avraham have to place a knife upon his son’s neck before Hashem called out “Do not stretch out your hand against the lad”? Our actions activate the chasdei Hashem. Avram the child becomes Avraham the adult, catapulting him into another stratosphere. So too our Gideon. Once he took the first step to climb the stairs and overcome his very profound fears, Hashem grabbed him by the hand as they “crushed it” together. 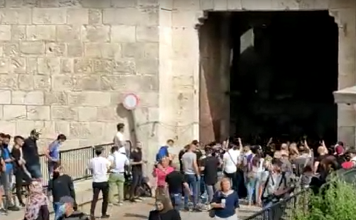