The square lettering was unabashedly simple, proudly colored in Zionistic white and blue. Though the text was concise – J. Levine Books and Judaica, since 1890 – the sign spoke volumes: here was a store that knew where it came from and what it stood for.

The shop, located on a humming Midtown block, displayed another, smaller sign – this one sobering. Seventy percent off, it read. Store closing.


A self-professed bibliophile and history enthusiast, I was hooked. With a quick watch check – twenty minutes until my bus – I ducked inside.

And then there were the books. Perched on shelves, lining the walls, stacked in boxes, spilling over onto the floor until they seemed to seep into the structure itself, suffusing the store with an aura of reverence for the printed word. Here was a bookstore that was enthusiastic about itself.

I found Danny Levine, fourth-generation owner of Levine’s Judaica, to be a genial open-faced man ready for a chat.

“This store is 130 years old, and I’ve been running it for the past 40,” he says. “My great-grandfather started it back in Lithuania, and when he emigrated due to pogroms the business was transplanted to the Lower East Side.” At that time, Levine informs me, many similar Jewish bookstores dotted that Manhattan landscape amid the pushcarts and hawking vendors.

The city claimed eminent domain in the ‘60s, prompting the Levines to relocate and create a seven-story department store of Judaica. “That was the golden age. We sold mantels for sifrei Torah, beautiful parochesim, shul menorahs – and we had the largest ketubah collection in the world,” Levine recounts. “We broadened our customer base by offering mail orders and creating a full color catalog.”

During Levine’s tenure, he sought to modernize the store. “At this point we were in Midtown. I expanded the premises, installed marble floors, made it really gorgeous. I had international customers telling me it was the most beautiful Judaica store in the world,” he says proudly.

“Judaica shops in large communities tend to focus inward on their own narrow customer base,” says Levine, “but mine was a Judaica store for the world. We’d have tourists from Brazil and France, an Israeli businessman hungry for a taste of home, Conservative and Reform clergy, curious souls interested in Jewish culture, a yeshivah kid who wandered in for a new yarmulke because his had blown away – all in the store at once.”

Even major media outlets were intrigued by this bookstore: it was featured on CNN and in the New York Times and the Wall Street Journal.

When asked about the secret to his success, Levine notes that his shop was just as much a community center as it was a bookstore. “We hosted a Mincha minyan every weekday for 30 years, followed by a short halachah shiur. At one point we hosted monthly Lubavitch classes, and there was the occasional book signing event.”

Ten years ago, business decelerated significantly. Levine credits declining sales to Amazon and the ubiquity and ease of online shopping. Combine that with rent, taxes, and employee salaries, and his brick-and-mortar store is no longer sustainable.

“It’s sad,” he says simply. “Some employees have been with us for 40 or 50 years and dedicated their lives to the store. For the first time in 130 years, there will soon be no J. Levine’s in New York City.”

So is the Internet the grim reaper of Jewish books and Judaica? Levine doesn’t think so. “We’re merely witnessing a shift in venue,” he says. He doesn’t see his store’s shuttering as indicative of a lessening interest in Judaism.

Reactions to the store’s imminent closure have been astounding. “We’ve seen an outpouring of love, support, and nostalgia,” Levine shares. One convert came back in tears, saying Levine’s Judaica is where he found Judaism – and he’ll soon feel untethered from his spiritual roots. Another long-time fan wondered if he could say kaddish for a bookstore.

Publishing companies also mourn a beloved sales outlet. “We’ve enjoyed a fruitful relationship with the Levines for years, and we regret to see their doors close,” says Matthew Miller of Koren Publishers. “We encourage customers to support their local Judaica shops, especially in this era of e-commerce.”

“Me, I have no regrets,” Levine declares. “I feel accomplished, satisfied. I’ve been blessed.”

Still, Levine’s not easily defeated. “I’ll maintain my website for online sales and continue renting out Torahs for bar mitzvahs that need them.” He’ll also continue selling ketubahs (his favorite Judaica item) in a pop-up shop inside a nearby framing store.

An image lingers as I turn to leave: a content fellow with a happy clutter of books behind him. Here is a man of the book, for the book, living by the books every day.

All he’s doing now is turning the page.

(Editor’s note: the author visited J. Levine Books and Judaica earlier in the summer. It has since closed.) 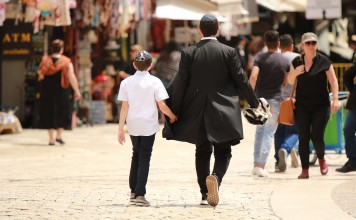 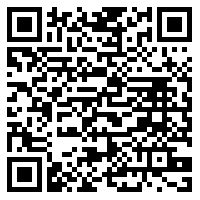