All my life, I’ve seen the photos of gyro hanging in bodegas and other non-kosher delis, and wondered how it tasted. Was it the same thing as shawarma? Now halfway into my lifetime, that wish was finally granted at Bridge: Turkish & Mediterranean Grill, and exceeded my expectations. Of course this gyro meat was kosher, so it did not contain any butter, but it tasted quite buttery nonetheless – its texture and taste were unbelievably delicious.

The owner Sam Eriske, a friendly smiling fellow with an American accent and calm nature, was born in Istanbul, Turkey, and opened The Bridge as a halal restaurant in 2014. Realizing he was located in the middle of the observant Jewish community of Highland Park, N.J. (just a few doors from a familiar Judaica store and kosher Chinese and pizza shops), he made the bold and risky move to go kosher in January of this year.

Eriske expected his former customers, many of them seemingly quite loyal, to stick with the change. Unfortunately, that largely did not happen. While the restaurant’s clientele changed over from predominantly halal-observant and Muslim to predominantly kosher-observant and Jewish, the menu has managed to change only slightly. The biggest change was the prohibition of bassar b’chalav. Eriske also kept his staff, and is very happy with his new customers, whom he finds to be most friendly and generous. Most importantly for any business owner, his business has been booming.

A typical meal at The Bridge begins with Pide (not pita!), a thick fluffy homemade bread. Served with the Pide are salads such as Saksuka (not the Israeli Shakshouka with eggs, but rather the reddish eggplant salad we would term Turkish Salad – probably the tastiest such item I have ever tried), the Acili Ezme dip (made with peppers, tomatoes, and much more), chummos and babaganoush, Rus Salatasi (Russian Salad, and an item unfamiliar to me, made with peas, pickles and potatoes). The Shepherd salad, a light item, is similar to Israeli salad, with the additions of limes and olives.

I was next offered the Bridge combo. Included in the combo are Sigara Boregi, an item close to Morrocan cigars, as well as scrumptious falafel and zucchini pancakes (both of which come in the shape of a patty). The zucchini pancakes have a mild, garden taste, and its tangy aftertaste was a delight. 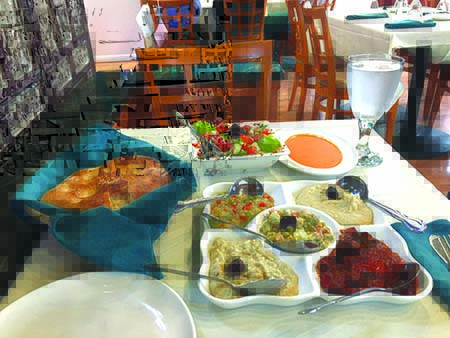 Next came my main course. Eriske told me that the switch to kosher meats has resulted in a large improvement in quality over the restaurant’s previous fare. The restaurant accommodates Sephardic minhagim – the meat is Beit Yoseph, sourced from the Alle company, and the stricter Sephardic practice of Bishul Yisrael is provided upon request. Moist Adana lamb is a succulent meat with light texture, phenomenal Izgara Kofte lamb patties, and marinated Chicken Shish. The presentation, with tomatoes and hot pepper arranged along with the meat and pita bread (underneath the meats, and with no pocket), was superb.

Finally, dessert was up for order. Eriske informed me that the most drastic menu cutbacks were made on these, as the former menu allowing dairy items cannot be fully taste-duplicated in parve versions. Of course, sitting in a Turkish restaurant, I could not help but order Turkish coffee. Fortunately, coffee does not require a hechsher, but the Turkey-sourced coffee they use happens to have one. Eriske informed me that all their coffees, and most of their seasonings, are sourced in Turkey.

The Baklava, which is homemade (like everything else in this fine gourmet place) comes in two types. These mouth-watering pastries tasted like they had just been concocted, and one had a very moist oily bottom. Their texture was very noodle-like, and of course had a wonderful nutty taste.

My day at The Bridge was well worth it, and I would highly recommend this restaurant, which features and elegant decor and courteous well-dressed staff. Let this New Jersey Turkish restaurant’s successful and delicious transformation to kosher cuisine become a first step toward a successful partnership between Jews and Turks, as well as a harbinger of a complete peace between our State of Israel and their country of Turkey. 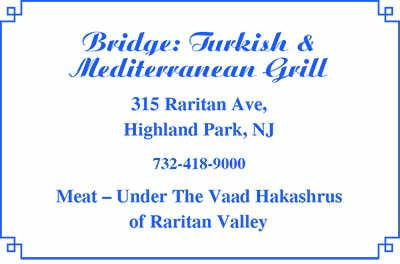