The world is complicated.  Surely it seems that Divine justice is elusive.  God’s role is frequently masked and our human situation is terribly fragile. Yet according to artist Batya F. Kuncman our condition is “most promising.”  Her optimistic artwork is designed to illuminate this shadowy nature of our existence and strives for clarity and ultimate closeness to God.  In “Landscapes for Humanity,” currently at the Philadelphia Museum of Jewish Art, images of infants are the tools she uses to explicate her belief.

In this highly original series of 12 paintings, created over the last four years, she has explored the vicissitudes of the human condition through the dual lens of Torah and human infancy.   Her exploration has been shaped by the narrative of the Garden of Eden and a belief that each baby she depicts is a unique being, echoing the Torah view that “each soul is an entire universe.”  The very nature of an infant is that it has unlimited potential that, once applied to a specific conceptual premise, can generate an extremely fruitful artistic expression.

The complexity of each image is immediately apparent in the signature painting of the exhibition, Offering (2010).  The reference is to the sacrifice of Isaac (Genesis 22) with the emphasis on Isaac’s strength of faith and courage, in conjunction with Abraham’s quality of kindness which he seemingly forced himself to overcome to obey God.  We find these notions in the kabalistic structure of the s’firot and the artist relies on them to contextualize her paintings.  This amazing child-Isaac is seen from above reaching up toward us and the heavens beyond, filled with optimism and strength.  What is immediately apparent is the disjunctive scale of the giant baby in relation to the islands and turquoise green seas behind him.  He looms gigantic in size, and in importance, as this 4 x 6 foot painting demands our understanding that this most primal offering defines all subsequent attempts to draw close to our Creator.

Initially more modest, Believer (2010) lures us into a child-like view of the universe.  A little babe is standing chest-deep in what appears to be a river, transfixed by an orange butterfly fluttering just out of reach.  The innocent child reaches up attempting to grasp at the elusive creature or perhaps to set it on its journey of freedom.  And therein lies the tension and mystery of Jewish prayer.  The artist maintains that we must see this image as an expression of Hannah’s seminal prayer (1 Samuel: 1:10).  Indeed the methodology of “service of the heart” is her gift to us, captured in the image of a child grasping at the wonder of a fleeting creature.  Our attempt to connect with the Divine is elusive and filled with wonder, just as this child grasps and yet does not connect.  Prayer is mysterious.

While these oil paintings are extremely realistic, the children and their surroundings rendered with startling detail, they are actually highly conceptual works of art deeply dependent upon biblical texts and explanations to properly contextualize the images.  Their meanings are only discernable in the interplay between text, image and concept as supplied by the artist along with her artworks.

Kuncman ups the ante in The Great Communicator, a startling image of a full figured infant on a sandy seashore.  His hands are held together in concentration as he tilts his enormous head to glance at the viewer. Behind him is a rich green ocean as the presence of Divine authority that supports this powerful infant.  This child, surely inarticulate and yet intrinsically filled with wisdom and strength, represents no less than King Solomon, the paragon of all human wisdom.  And yet, this child carries his kingly burden without a care, filled with humility. In his dream Solomon responds to God’s offer of limitless bounty with modest insight; “I am but a little child therefore give your servant an understanding heart to judge your people, to distinguish between good and evil (1 Kings 3:7).”  More than any of the other images, this brown-eyed child looks us right in the eyes, his penetrating gaze searching out our understanding and intentions.  Will we respond to his needs as he grows and assure that he reaches his full potential?  The answer and outcome is surely in our hands.

As is more than obvious, the Israeli born Kuncman’s work as a conceptual artist is far-reaching.  She considers herself a multidisciplinary artist and two works she is currently showing in the Hartford, CT exhibition “Seduced by the Sacred” (Charter Oak Cultural Center, www.charteroakcenter.org, until November 22) validate that claim.   These manipulated photographs introduce Torah texts into the very fabric of life.  Sacred Ground is simply an image of an Israeli beach that fills most of the rectangle, surmounted by a thin strip of sea and a narrow expanse of cloud-filled blue sky at the top.  Then you notice the text faintly written in the sand, the first two paragraphs of the Shema written in formal Torah letters.  Once you understand what the text reads the artwork leaps alive; image, text and title percolating into a new meaning of how Eretz Yisroel is literally infused with the holy script.

Her companion photograph, leAhava, reveals a similar meaning in a shockingly personal way.  We see a close-up of one person’s left eye.  The eye is open looking straight at the viewer, framed by its upper and lower lids.   Irregular eyelashes punctuate the exposed eyeball.  Only once you notice the Torah letters inscribed neatly across the light brown iris does the image become considerably more than a portrait of one eye.  Indeed in making out the text one can only see a cropped view of three lines of the second paragraph of the Shema.  While leAhava is legible as is most of naf’shehem only a bit of d’ganechha appears around the lower edge.  Somehow this bizarre image concretizes the realization of how we indeed internalize the words of Torah and how deep within us our acceptance of mitzvos should and can be.  Here the text operates as an engine of meaning, proclaiming that the commandment to love God (l’Ahava) must infuse our very souls (nafshehem) and to do so results in our sustenance (diganechha).  The experience of realizing what the artist is getting at is electrifying.  In one image she has restated the fundamental meaning of this essential Torah passage.

By insisting on linking the power of the visual image with complexities of sacred text, literally brought into the image, Kuncman has raised the dialogue between the observant community and the visual arts to a new level of sophistication.  Once the text operates this way, as partner to the visual, it cannot be relegated to the role of ancillary reference.  Similarly the visual cannot operate as mere illustration of sacrosanct holy writ.  Both elements are forced to work together, commenting on and strengthening each other in a powerful visual/textual partnership.  The new and exciting meanings that come out of this union are part of the inspired future of Jewish art.

Watch (Text and Subtitles) MK Smotrich Full Speech: The Only Solution for the Israel-Arab Conflict [video] 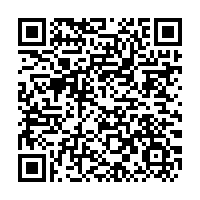