The New Authentics: Artists of the Post-Jewish Generation

Ludwig Schwarz’s 2000 assemblage of seven altered thrift store-bought paintings, “Untitled (Born to Be Mild),” can be said to evoke Piet Mondrian’s abstract works, which rely heavily upon a simple palette and the grid. But one canvas, which depicts a camouflaged fighter jet slicing through billowing clouds and a gorgeous blue sky above a burnt-orange mountain range, is far more bizarre than anything Mondrian created.

Bold black letters on the canvas declare, “Elie Wiesel vs. The Dallas Cowboys.” At publication time, the Texas-based football team (the artist is also based in Dallas) is competing in the national playoffs after posting a 13-3 record during the regular season. But however great a season the team has, what could it possibly share in common with the renowned Holocaust survivor, educator and human rights activist, and why is it competing against Wiesel?

The work’s lack of a title offers little interpretive guidance from the artist, but art critic and historian Lori Waxman’s essay in the catalog to the Spertus Museum’s exhibit, “The New Authentics: Artists of the Post-Jewish Generation,” which includes Schwarz’s piece, provides a little help. “Unexpected and somewhat perverse, these various high-low juxtapositions – whether of tacky furniture and serious paintings, or of bad amateur pictures and clashing cultural references – question elitist presumptions about painting while also succeeding in being quite funny,” Waxman writes of the seven pieces. “Not funny ha-ha, of course, but funny strange.”

In fact, “Born to Be Mild” is in good company at the Spertus show, and the very term “post-Jewish” is a bit strange. What can post-Jewish mean in light of God’s many promises to the prophets in the Bible that no matter how much assimilation, anti-Semitism and idolatry plague the Jewish people, a remnant will always remain intact? Is the term “post-Jewish” anti-Semitic and assimilationist? Or is it simply realistic?

According to the Merriam-Webster dictionary online, “post-” is a prefix, the etymology of which derives from the Latin, which means “after, subsequent, later.” A quick search through a few online dictionaries and encyclopedias yields no entries for “post-Jewish” or “post-Muslim/Islam,” but Wikipedia does have an entry for “post-Christian.” According to the Wiki entry, the term refers to an ideology “that is no longer rooted in the language and assumptions of Christianity, though it had previously been in an environment of ubiquitous Christianity.” If Judaism is factored into that definition, a post-Jewish era would be one of movement away from a Jewish theological-based rhetoric and lifestyle toward one of Jewish peoplehood – kosher-style instead of kosher.

According to the Spertus curatorial staff, post-Jewish is a far more complicated term. According to the exhibit’s press release, “Post-Jewish, as used here, does not imply ‘after Jewish,’ but emphasizes hybridity and challenges assumed cultural categories and fixed definitions.” As the first temporary exhibit at the Spertus’ new $55 million building on Michigan Avenue in Chicago, the “New Authentics” is perfectly aligned for offering a fresh perspective on Jewish culture.

In the beginning of her catalog essay, Staci Boris, senior curator at the Spertus Museum, writes, “The ‘knowledge of not knowing,’ as Freud posited early in the last century and as the postmodern age appears to affirm, lies at the core of what it means to be a Jew.”

“New Authentics” features 16 American Jewish artists (including Schwarz), who, according to the press release, are “of a certain generation” (most born in the 1960s and 1970s) and “who have varying degrees of Jewish education and affiliation and are culturally diverse, yet all of them have been shaped in some way by their Jewish backgrounds.” According to the release, the artists are typical of their generation, insofar as “most do not define themselves as Jews first and foremost, and many do not prominently assert their Jewish identity in all of their work, yet some of their concerns and fixations can be understood through their art.”

New York-based Lilah Freedland’s print “dream as though you’ll live forever, live as though you’ll die today” (2003) illustrates this diversity, and also some of the dangers in such definitions. In the photo, a young man dressed as a Hassid leans against a stone wall covered with graffiti, holding a cigarette in his right hand. According to Waxman’s analysis in the catalog, the title derives from a James Dean song, so the photographic print “anticipates the current hip factor of all things Jewish,” while it also “fetishizes the young men of a certain religious sect, turning forelocks and fringes into something tall, dark, and handsome.”

Clearly, to Freedland’s camera (she lived in Williamsburg at the time), the Hassid ought not to be “tall, dark, and handsome” under normal circumstances, but the cigarette lends him a cavalier, attractive aura. The same holds for Freedland’s ink and acrylic drawing, “God bless video” (2002), which shows two men wearing tallitot and tefillin. While one holds a Siddur and prays, the other carries a hand-held video camera, aimed at the viewer.

Granted, holding the camera with an arm wrapped in tefillin isn’t exactly kosher, but how better to record a holy experience in the digital age? At least the fellow’s having a holy experience.”

In the context of “The New Authentics,” Hassidim with cigarettes and Jews carrying cameras in the synagogue might be postmodern symbols of the “post-Jewish” generation, but in fact many Jews smoke, and plenty of people record special occasions in the synagogue even while wearing tefillin. Some of the post-Jewish symbols are quite old hat.

Other works in the show are quite provocative. Shoshana Dentz, who grew up Orthodox, addresses fences’ capacity to keep in and out in her painting “home lands #13,” which evokes concentration camp fences. Collier Schorr’s photographs of Germany reveal a swastika on a basketball hoop’s backboard in “Spielplatz (Lindenfeld)” (1997). Cheselyn Amato’s “Fabric Collage (Placemats, Napkins, & Deathcamps)” combines bright-colored patterns with an aerial image of a concentration camp.

The artists of “The New Authentics” ought not to be dismissed as lesser Jews who have turned their backs on the tradition. They should not be criticized for not painting in a sufficiently Jewish manner. They should perhaps even be congratulated for their courage in introducing so much Jewish content and as many ideas as they have, for that is often aesthetic suicide in the gallery and museum world.

But where the lot should be taken to task is where they turn their eyes on the Orthodox community. If they were truly postmodern Jewish artists, they would not fetishize and misrepresent the Orthodox community and seek out examples they see as breaking the Orthodox stereotype. When these artists resist being stereotyped, they should extend the same favor to their Jewish subjects, even if they do wear tzitzit and side curls. 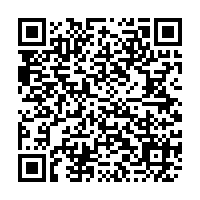