A cure for Alzheimer’s may be in the works.

A new clinical study found that memory impairment in Alzheimer patients not only can be halted; it can actually be reversed. Researchers in the study used electromagnetic impulses to stimulate parts of participants’ brains. Each of the participants had been diagnosed with mild to moderate Alzheimer’s disease and, of the eight participants, seven saw enhanced cognitive performance after only two months.

Eight participants may not seem like a large number. But the fact that the vast majority of participants saw a reversal in their symptoms – without suffering any negative side effects – is groundbreaking.

One of the main physiological characteristics of Alzheimer’s disease is the collection of beta-amyloid and tau proteins in the brain. These “clumps” disrupt normal communication pathways between brain cells. Despite years of research into Alzheimer’s disease, however, preventing these “clumps” from forming – or, at the very least, dissolving them once they form – has remained elusive.

In this study, researchers affiliated with NeuroEM Therapeutics – a medical device company based in Phoenix, Arizona – seem to have tapped into something potentially revolutionary by using technology instead of drugs. They created a device shaped like a cap with multiple highly-specialized emitters that are activated at certain intervals. Twice a day for two months, study participants received one-hour treatments, which were administered by their at-home caregivers.

Researchers also collected blood and cerebrospinal samples of participants at the beginning and end of the study. It seems that the treatment disaggregated the beta-amyloid and tau proteins. MRI scans also showed better communication between brain cells in the cingulate cortex, and increased communication is integral to increased cognitive function. None of the participants wanted to return their devices when the study was over!

Of course, much more research needs to be done, and a much larger 17-month clinical trial is in the works. Researchers at NeuroEM’s Therapeutics expect it to take place later this year. They intend to test 150 Alzheimer patients with mild to moderate Alzheimer disease to see if they can replicate their results.

In the meantime, this study moves us one step closer to finding a cure for Alzheimer’s. For the many people suffering from this disease, as well as their loved ones, a cure cannot come fast enough. 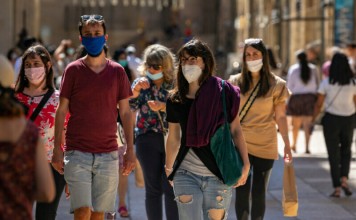