Philip Gordon is U.S. Special Assistant to the President and White House Coordinator for the Middle East, North Africa, and the Gulf Region. Gordon was appointed to this position in March of 2013.

In a tongue-lashing directed solely at Israel, Gordon embodied the grotesquely unbalanced position of this U.S. administration, claiming the supporters of terrorism are peaceful, and the supporters of peace are akin to terrorists.


Gordon was speaking at the ill-fated Haaretz Peace Conference. Ill-fated because it was revealed to be both hypocritical and unerringly ill-timed. During the “peace” conference attendees verbally and physically attacked Naftali Bennett, a member of the Israeli Knesset. The tzeva adom rang through the building in Tel Aviv where the conference was held, forcing those present to run and seek shelter in doorways. Some peace conference.

There was not one sentence in a very lengthy speech which took Abbas to task either for demanding the release of all “political prisoners,” i.e. murderers, or for glorifying and providing pensions for genocidal terrorists, or for insisting that its hoped-for future state would be one that practices apartheid and will be judenrein.

The following are only some of the most egregious and aggressively naive comments made by Philip Gordon in Tel Aviv on Tuesday, July 8:

Israel confronts an undeniable reality: it cannot maintain military control of another people indefinitely. Doing so is not only wrong but a recipe for resentment and recurring instability. It will embolden extremists on both sides, tear at Israels democratic fabric, and feed mutual dehumanization.

As the President has said, neither occupation nor expulsion is the answer. Just as Israelis built a state in their homeland, Palestinians have a right to be a sovereign, free, and secure people in their own land.Or to quote one of your own leaders, Ariel Sharon: It is impossible to have a Jewish democratic state, at the same time to control all of Eretz Israel. If we insist on fulfilling the dream in its entirety, we are liable to lose it all.

Reaching a peace agreement with the Palestinians would help turn the tide of international sentiment and sideline violent extremists, further bolstering Israels security. We know all too well the troubles that can arise for Israel internationally when there is no movement on the political track, especially when settlement activity continues to make the potential peace map more difficult and to undermine international support for Israel. On this, I should also be clear of the United States longstanding position: we consider settlements illegitimate and an impediment to progress on peace negotiations. Settlement announcements would be a counter-productive reaction to the kidnapping and murder of the three Israeli teenagers.

Really? How about this undeniable reality: Any Palestinian State will be a racist, terrorist state which will be fully militarized and which will not just “tear at Israel’s democratic fabric,” but will tear at – perhaps tear apart – Israel completely, which is the goal of most of the leadership of the Palestinian Arabs.

And thanks for that shot about the scariest thing in the Middle East, oh, not ISIS, not masked terrorists who love to plunge their hands into the carved open bodies of dead Jews, and not young adults who revel in sawing off the heads of Jewish infants, no, not those, but the far scarier houses for Israeli families!

In contrast, if we fail to come back to peace talks, renewed efforts to isolate Israel internationally and legitimize Palestinian statehood unilaterally are all but certain. The United States will do all it can to fight boycotts and other delegitimization efforts. But in many of these realms, particularly outside the Security Council, our ability to contain the damage is limited, and becoming more and more challenging. This is what American friends of Israel mean when they express concerns about the potential for Israeli isolation if peace talks do not succeed. Let me be absolutely clear that these are not threats. The United States will always have Israels back. Thats why we fight for it every day at the United Nations, where we have worked diligently to ensure Israel is treated fairly and on par with all other states.

But as Israels greatest defender and closest friend we owe it to you to ask fundamental questions which in fact many Israelis are asking themselves: how will Israel remain democratic and Jewish if it attempts to govern the millions of Palestinian Arabs who live in the West Bank? How will it have peace if it is unwilling to delineate a border, end the occupations and allow for Palestinian sovereignty, security, and dignity? How will we prevent other states from isolating Israel or supporting Palestinian efforts in international bodies if Israel is not seen as committed to peace?

As becomes clear from reading Gordon’s speech, his information about the Middle East must come from the New York Times or the Guardian. Did you notice that only Israel will be a pariah if the peace talks fail? The Palestinian Arabs, with no obligations, no responsibilities and no punishment if peace doesn’t break out, is the pitiable party suffering from occupation and deserving of “sovereignty, security and dignity.”

The remaining problematic paragraphs follow. Please note that Gordon takes arrogance to a new level by demanding Israel be prevented from undertaking any steps that are not dictated by the United States, and where the Arab Peace Initiative is portrayed as a great deal for the Jewish State. And Gordon, apparently one not able to omit a single failed policy from his noxious stew of Israeli Insults also slips in that adjective beloved by all haters of Israel: contiguity, and the insistence on the Green Line with land swaps, as the only permissible peace template. How’s that for patent support for this devil spawn of a creature, the Palestinian Unity Government?

Given where we find ourselves, it is understandable that some on both sides are looking at other options, some of which were presented at this conference today. But most of these are stop-gaps at best. At worst, they are a recipe for continued or increased conflict or isolation. A one-state solution is implausible, and would effectively mean an end to the Jewish and democratic nature of your state. Unilateral annexation of West Bank territories populated by Israelis is wrong, illegal, and a recipe for Israels isolation. The United States could never support it, and I doubt any of Israels other friends would. Other unilateral or interim measures may appear tempting alternatives, but they do not solve Israels and the Palestinians long-term problems. In fact, they could deepen them. The fact remains, only a negotiated solution two states for two peoples can give Israelis and Palestinians the futures they need and deserve.

Israel should not take for granted the opportunity to negotiate that peace with President Abbas, who has shown time and again that he is committed to nonviolence and coexistence with Israel.

President Obama has articulated his vision for what peace looks like on several occasions. It hasn’t changed. But it bears repeating today, and at this forum.

A lasting peace will involve two states for two peoples: Israel as a Jewish state and the homeland for the Jewish people, and the state of Palestine as the homeland for the Palestinian people, each state enjoying self-determination, mutual recognition, and peace. While the core issues of the conflict must be negotiated, the basis of those negotiations is clear: a viable Palestine, a secure Israel.

Negotiations should therefore result in two states, with permanent Palestinian borders with Israel, Jordan, and Egypt, and permanent Israeli borders with Palestine. The borders of Israel and Palestine should be based on the 1967 lines with mutually agreed swaps, so that secure and recognized borders are established for both states. Any peace agreement will require robust security provisions that safeguard Israels security. And the Palestinian people must have the right to govern themselves, and reach their full potential, in an independent, sovereign and contiguous state.

Gordon’s presentation was a paean to appeasement and anti-Israel racism. It alone could have triggered the tzeva adom. 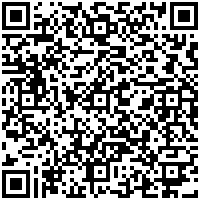