Just past the city of Modi’in on Highway 443, in the direction of Tel Aviv, is an exit sign to the “Graves of the Maccabees.” Throughout Chanukah, the parking lot that this sign leads to is filled with visitors from all over the country. In a forest preserve not far way is another sign identifying an old stone-block structure as the tomb of Matityahu, leader of the famous revolt.

The Jewish Press asked a few historians and noted field-guides whether these burial grounds really mark the final resting places of the heroes of Chanukah.

“The search for the graves of the Maccabees began toward the beginning of the Ottoman period, in the 15th century. They discovered gravesites not far from today’s city of Modi’in and whimsically decided that the open pits dug into the bedrock were the remains of the burial tombs of the Maccabees, as mentioned in Book of the Maccabees and Antiquities of the Jews.

“Some people suggested 150 years ago that a site called Horbat-HaGardi, located approximately three kilometers west of Modi’in, marks the burial grounds of the Maccabees. Crucifix symbols were found on the mosaic floors of the burial chambers, but excavators at that time theorized that an elaborate Christian mausoleum was built upon the gravesite of the Maccabees since they were cherished as religious martyrs. The Crusaders, for example, believed they were the Maccabees of their time. Conclusive evidence is lacking.

“A dig at the site in 2015 by the Israel Antiquities Authority revealed impressive burials vaults and enormous pillars suggesting a second story, but much of the building and its stones had been pillaged and robbed, so the mystery remains.

“We do know, however, that the open graves off of Highway 443 opposite Modi’in are certainly not from the time of the Maccabees. They date from the Byzantine era, at least 500 years later.

“The sign on the highway is nice for tourists, the location makes for a popular picnic site around Chanukah, and it is an inspiring place to bring a busload of young IDF recruits to read to them the dramatic speeches of Mattitiyahu and his son, Yehuda, on the eve of battle against the overwhelming Greek/Syrian forces in order to instill in our young soldiers a fighting patriotic spirit. But as far as archeological fact is concerned, the location is well-meaning fiction.”

What about the tomb of Matityahu in the forest?

“That is the tomb of an Arab named Sheikh Gharbawi. Apparently, some 35 years ago, a group of Breslov chassidim who lacked the money for airfare to Uman decided to make it the resting place of the father of the Maccabees and leader of the Chanukah rebellion.

“They put up a sign and placed an old-looking slab on the head of the tomb, engraved with the inscription, ‘Matityahu, son of Yochanon the High Priest’ with two Stars of David. Lots of people go there to pray. It goes to show you what good advertising can do.”

Dr. Hagai Ben Artzi, a historian at Bar-Ilan University,
author of a reader-friendly version of the ‘Megilla Chanukah’

“Then there are many other places where the tradition is strong, but actual pinpoint mapping is difficult because of a lack of reliable documentation. You have to remember that for almost 2,000 years most of the Jewish nation was exiled from its homeland and things were forgotten.

“When the State of Israel was established, David Ben-Gurion formed a commission to locate holy and historical sites throughout the country in order to strengthen public awareness to our historical connection to the land. When an Arab village was discovered in a location where a historical site was thought to be located, the Hebrew or Biblical name was adopted.

“For instance, the Arab village Mukmush, in the area where Yonaton [Hamaccabee] had a fortress, was changed back to Mikmash. Many places whose original Hebrew names had been given Arab variations, Ben-Gurion simply reverted back to their Jewish origin. The Arabs guarded names, locations, and the historic tradition – what we call the ‘masoret.’

“After the establishment of the state, mistakes were made, but many subsequent archeological excavations and geographic studies supported the historic traditions. For example, I grew up in the community of Tiv’on, east of Haifa, in the hills between the Zevulun and Jezreel valleys, located near an Arab village called, ‘Cous-Cous Tavaron.’ The ancient Jewish community of Tiv’on is cited in the Talmud as the home of several sages.”

Did this happen with Modi’in as well?

“To begin with, the site attributed to be the burial place of the Maccabees, just off Highway 443, dates back to the Byzantine era, not to the Second Temple.

“But there is an important place between today’s Modi’in and the Latrun Junction called Khirbet Umm el-Umdan where the ruins of a Jewish community were discovered, including a synagogue whose plan is similar to that of Jewish houses of worship during the Second Temple period, such as those discovered at Masada, Herodion, and Gamla.

“Because of the vocal similarity between Umdan and Modi’in, it has become known as the ‘Modi’in Synagogue.’ When I take people on a tour in the footsteps of the Maccabees, I take them here. Some people speculate that the burial ground of the Maccabees is in this approximate area as well.”

He says that while no one has ever found the remains of an ancient town with a sign reading, “Modi’in,” an old map of Eretz Yisrael from the sixth century in what is now Jordan marks a place called Modeta, with a citation that it is the Modi’in of the Maccabees. The location is very close to the Modi’in of today.

“In the 1800s, archeologists from Europe made extensive excavations in the area and located an Arab town called Medea, which they declared to be the town where the revolt of the Maccabees, began, but it later turned out that nomads from Egypt had established the village a few decades before.

“The graves discovered near Highway 443 are clearly from the Byzantine era. Interestingly, ever since Greek and Roman times, and most likely before, Highway 443 was the main road from the port of Yaffo to Jerusalem. Highway 1, with its winding ascents and descents, is suitable for motor vehicles, but for a pilgrim on foot, or for a donkey, or horse and wagon, the relative straight, gradual incline of Highway 443 is far more practical.

“This is one reason why the summit of the steep incline to Beit Horon made it the almost certain choice of Yehudah the Maccabee to begin his ambush of the massive Greek force ascending from the coastline.

“Other possible sites for the burial place of the Maccabees have been located and explored, such as ‘Horbat-HaGardi,’ but there is no certain confirmation – a problem we have with many ancient gravesites and locations from Tanach and Talmudic times.”

Can you name a few?

“The tomb of King David on Mount Zion, for example, is a modern phenomenon. We know from Tanach that King David was buried in Ir David, not in the edifice on Har Tzion, which was built 1,000 years later.

“L’havdil, the building on Mount Zion designated as the site of ‘The Last Supper’ dates back to the Crusades, not to the end of the Second Temple era. It makes a nice and easy-to-reach spot for tourists to visit, but it is as real as Harry Potter.” 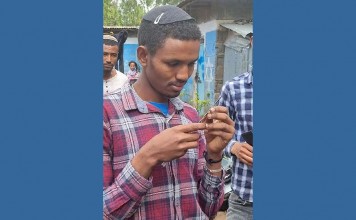