In 2017, Assaf A. Voll wrote what was then the most comprehensive history of the Palestinian people. It was quickly recognized as such, and the book rapidly rose up the charts to be an Amazon best-seller (thanks in no small part to Muqata and JewishPress.com readers), until it was banned by both Amazon and Barnes & Noble.

JewishPress.com Pushes ‘A History of the Palestinian People’ to Top Amazon Ranking

As of Monday afternoon, in the category of Israel & Palestine, the book is ranked #2 on Amazon, beating out Michael Oren’s Six Days of War at #5, and Dan Senor’s and Saul Singer’s Start-up Nation at #10.

In the Middle East History category, the book is ranked #9, and it is ranked overall a respectable 2,360 of all books on Amazon.

Update: As of Monday night, it is now #6 in the Middle East History category, and 1,780 in all books.

Update: As of Tuesday morning, it is now the #2 ranked book on Amazon for New Releases in the Middle East History category.


Ultimately, Amazon took the book down, but not before it reached a remarkable ranking of 341 in the All Books category, a ranking of 49 in History, and was #1 in Middle East History.

The Hebrew version is still available for free download. It’s in easy Hebrew too.

Voll has simply outdone himself with his second edition of the book “A History of the Palestinian People: From Ancient Times to the Modern Era – Second Edition”.

Despite the 132 blank pages, it is still quite an easy read.

The customer reviews were unusually positive in their coverage.

Sums up almost everything you must know about the roots of a neverending story.
It is a must-have book in every academic library.
The writer managed to describe the biggest mistery in human history.
This book can be easily compare to Sapiens: A Brief History of Humankind or A Brief History of Time.

Another described it as:

Very accurate and thorough review of the Palestinian history

This book is nothing short of a masterpiece. On the one hand, it is a surprisingly quick and easy read — so much so that you may find yourself finishing it in just one sitting. On the other hand, it is utterly complete, neglecting no aspect at all of the rich, long epic of the Palestinian people’s historical tapestry. After reading this, you will have a deep, thorough grounding in this nation’s compelling saga from time immemorial.

This book contains everything one needs to know about the history of the palestinian people. Is sums up the entire history, and all available information. Not one single detail is missing. I highly recommend it.

While reviewer Moshe Katz described it as:

“Undoubtedly the deepest research ever done on the subject.”

On the other hand, reviewer Ariel wasn’t completely satisfied, writing:

I read the first addition, and while I found it very engaging and pretty accurate I thought it had a bit of a bias towards the Palestinian narrative. That was to be expected in the common political atmosphere so I gave the first addition 5 stars. I had hoped that the new addition would maybe reflect and try to be less biased but I see that it went in the other direction, which is why I only gave it 4 stars this time.
All in all it’s good and a decent portrayal of history, just expect the bias.

Without a doubt, despite the bias noted by Ariel, the book is incredibly unique in its historical accuracy of 3000 years of Palestinian history and their unique contribution to humanity.

There’s no doubt you will be gripped by the history, and will both want and be able to read through the entire book in one sitting. Did I mention that every page of the book is blank?

As for the author, Assaf Voll was born and raised in Nir Etzion, on the Carmel Mountains, and currently resides in Tel Aviv, Israel. He is a publicist, editor and creative specialist. He holds an M.A. in History from Haifa University and taught there as an adjunct lecturer.

For now, the book can be purchased on Amazon. We recommend you look inside before buying, after all, you should never judge a book by its cover. 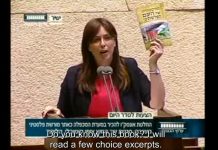 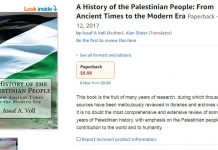 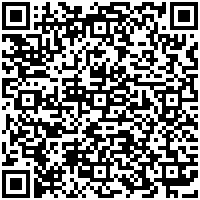