{Originally posted to the authors’ blogsite, This Ongoing War}

A year ago, a murderous Arab-on-Israeli terrorist attack in Jerusalem’s Old City took the lives of two young Jewish men:

The two died of their wounds shortly after being stabbed in Jerusalem’s Old City by a Palestinian terrorist. Banita’s wife was in serious condition and their two-year-old baby was lightly wounded. She was taken to Hadassah Hospital Ein Kerem and was undergoing surgery. The toddler was taken to Shaare Zedek Medical Center for treatment where he remained in stable condition. Lavi, a Jerusalem resident, leaves behind a wife and seven children. A rabbi at the Old City’s Ateret Cohanim yeshiva who lived nearby, he had rushed to the scene when he heard screaming in the street. [“2 killed in Jerusalem attack named as Nehemia Lavi, Aharon Banita“, Times of Israel, October 3, 2015]

A year has gone by – twelve months filled with who-knows-what weighty challenges, unthinkable difficulties and corrosive, unfathomable, endless pain for the parents and families the two murdered Jews left behind.

In the conventional way of thinking about such matters, the minds of those irretrievably damaged family members are undoubtedly filled with thoughts of vengeance, of bloodshed and of evening the score.

That, at least, is how some ostensibly well-informed people view those of us who have been at the receiving end of Arab-on-Israeli savagery. As one prominent Jewish leader in the United States wrote publicly just a few weeks ago, in supporting a local fund-raising activity of Parents Circle Families Forum, a terror victim group about whose activities we have written critically several times, Israeli victims of Arab terror are entitled to

their natural right to revenge, after losing the most precious thing…

We wrote to that leader and told her that her comment was sharply at odds with what we have experienced:

(Our correspondence with that prominent US Jewish community leader is the subject of an article we are preparing for publication now. That’s another reason it’s on our minds this morning.)

Is it possible to identify a pattern in the way Israeli victims – those who themselves survived acts of Arab-on-Israeli savagery and the families and loved ones of whose lives they were part – react?

We think there is and have plenty of anecdotes to back that up.

Here, from today’s Israel National News, is an instance that describes how an informal group of Israeli Jewish youngsters, living in Jerusalem’s Old City –

have dedicated a coffee kiosk for guards and security forces on duty in the location where, one year ago, an Arab terrorist murdered Rabbi Nehemia Lavi and Aharon Benita. The dedication was held last night… Every week, the youths held birthday celebrations for Border Police, and would pass out coffee, cakes, and other snacks to the security forces stationed around the Old City. Recently, the youths decided to intensify the initiative, and raised 50,000 shekels to renovate a store, located right at the scene of last year’s murders, that would become a coffee kiosk for the benefit of security forces. Michael Benita, the father of murder victim Aharon, came to the dedication event for the coffee kiosk, and expressed his excitement at the initiative: “The efforts of the youth are not something to be taken for granted, the establishment of this corner is not to be taken for granted. I am happy that, in this fashion, they are memorializing Rabbi Nehemia and Aharon.” Hadar Katzover, one of the youths of the Old City who contributed to the effort, shared her impressions: “We worked very hard on this. This is our way of continuing [the legacy of] Rabbi Nehemia Lavi, and this is our way of dealing with what happened. Where they cut life short, we will add goodness!”. She invited “the entire public” to come to celebrations following the Jewish holiday of Simchat Torah on Monday night at 9:00 PM on Hagai Street, adding: “Come and strengthen residents of the Old City.” The daughter of Rabbi Lavi cut the ceremonial initiation ribbon, while the brother of Aharon Benita fixed a mezuzah to the doorpost.[“Where they cut life short, we will add goodness“, Israel National News, October 23, 2016]

Being really blunt about this, and speaking as parents of a child whose murder at the hands of Hamas terrorists led to the creation of a charity that does highly effective work, reading and writing about this Old City cafe and the acts of chesed on the part of those who created it makes us just about burst with pride and admiration.

Is this the only way to deal with life after everything is turned upside down by barbarism, bigotry and hatred?

No, there are certainly other ways. This way, for instance:

As the Jerusalem Post reports, the Palestinian Authority controlled by Mahmoud Abbas has just decided to honor Muhannad Halabi by naming a street after him. Halabi is the 19-year-old murderer of two Jews killed close to the Old City’s Lion’s Gate on October 3, 2015 in a stabbing and shooting “operation” that took the lives of Rabbi Nehemiah Lavi and Aharon Benita and seriously injured Benita’s wife, Adele, and their two-year-old son. The assailant was shot dead by police at the scene. Palestinian Media Watch reported several days ago that the Palestinian Bar Association has already grotesquely bestowed an honorary law degree on the deceased stabber/shooter/attacker. Now the municipality of Surda/Abu Qash, in the suburbs of Ramallah, will name a street for him “to emphasize the national role played by Palestinian municipalities.” Can a society ever be rehabilitated from pathologies as deep and all-pervasive as theirs? [“28-Oct-15: The Pal Arab passion for knife attacks isn’t just for social media: they sincerely mean to kill“]

The barbarians (and those who stand with them) have their ways and their values. And we have ours.
Advertisement 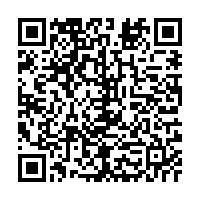