Prime Minister Benjamin Netanyahu has approved a plan to advance the “Jordan Valley Annexation Bill” proposed several weeks ago by Likud MK Sharren Haskel, according to a report by The Jerusalem Post.

The move comes in the wake of an announcement Monday by Secretary of State Mike Pompeo that the United States plans to reverse its stance on the legality of Israel’s Jewish communities in Judea and Samaria, no longer considering them “illegal.”

In view of the announcement, Haskel submitted a request to fast-track the bill, exempting it from the mandatory six-week waiting period for new legislation so it can proceed to a vote by the full plenum next week.

“The bill has the prime minister’s full backing,” she said. “There is no reason that this important bill won’t pass in the plenum with an 80-member majority.”

The Blue and White party has also vowed to annex the Jordan Valley in its previous election campaign promises.

The request must still be approved in a vote by the Knesset Arrangements Committee, led by Blue and White party MK Avi Nissenkorn.

A similar bill to annex the Jordan Valley has also been proposed by Yisrael Beytenu party Knesset member Oded Forer. The Hebrew-language news outlet Makor Rishon reports the two bills could move to a vote together next week in the plenum. 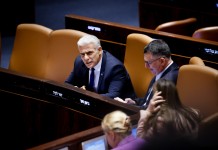