The inexcusable decision by the International Criminal Court’s chief prosecutor to proceed with a probe into Israeli “war crimes” can only be explained as being motivated by raw anti-Semitism.

How else to fathom the ICC’s singling out of the Israel Defense Forces (IDF), which goes further than any other military in the world to protect civilians in the battlefield.

The IDF operates in a complex theater in which Palestinian terrorists use civilians as human shields, deliberately house their terrorist infrastructures in densely populated civilian areas, and indiscriminately fire projectiles into Jewish civilian population zones.

Still, the IDF goes to extreme lengths to ensure the protection of Palestinian civilians even though terrorists intentionally surround themselves with civilians to thwart Israeli operations because they know that Israel is a beacon of morality.

The Israeli military regularly warns civilians of incoming attacks with phone calls and text messages. It employs “roof knocking” – or firing warning shots before any aerial bombing – thus providing Palestinian terrorists with advance warning of incoming attacks. If civilians in the vicinity still don’t evacuate, the Israeli army often makes announcements on loudspeakers. The IDF has called off scores of military raids because civilians were in the way.

Making a mockery of justice, ICC chief prosecutor Fatou Bensouda announced on Friday that she was “satisfied that there is a reasonable basis to proceed with an investigation into the situation in Palestine.” Bensouda ignores that Palestine, of course, is not an existing state.

Bensouda claimed “there is a reasonable basis to believe that war crimes were committed in the context of the 2014 hostilities in Gaza” by the IDF for allegedly launching disproportionate attacks and “willful killing and willfully causing serious injury to body or health… and intentionally directing an attack against objects or persons using the distinctive emblems of the Geneva Conventions.”

For good measure, she seemingly drew a moral equivalence between the IDF and Hamas, charging that there is “reasonable basis to believe that members of Hamas and Palestinian armed groups” also “committed… war crimes” by targeting civilians or engaging in torture.

Her statements have been taken as an indication that a full investigation could be launched, potentially resulting in charges against Israeli officials.

Bensouda’s outrageous claim of “willful killing” flies in the face of everything the IDF does to protect civilians. And her charge of Israel’s “disproportionate” response during the Gaza War opposes basic military doctrine of deterrence.

Let’s not forget why the Gaza War was launched in the first place. Hamas repeatedly violated a truce by firing scores of rockets from Gaza into Israeli civilian population zones. In one day alone, July 8, Hamas launched 40 rockets into Israel, prompting Israeli retaliation and the start of the conflict.

What nation on earth would allow a terrorist army to amass a rocket infrastructure in a neighboring territory and use that land – which Israel evacuated in hope of peace – as a staging ground for constant terrorist rocket attacks?

By claiming that Israel’s self-defense is “disproportionate,” what exactly is the ICC trying to say? That instead of acting to minimize the terrorist threat against its civilians, Israel should respond to every act of Palestinian terrorism with an equivalent act? So if Hamas fires a rocket into a Jewish city, Israel should respond in kind by indiscriminately launching a terror rocket into a Palestinian city with the intent of killing civilians? That the next time a Palestinian stabs an Israeli, the Jewish state should send one of its own into Ramallah to stab a Palestinian civilian? The ICC charge is preposterous, nonsensical, and negates Israel’s ability to defend itself and degrade Hamas’s terrorist infrastructure.

Which so-called war crimes did the IDF commit exactly? Who provided the ICC with this purported information? Every “government” agency in the Gaza Strip is controlled by the Hamas terrorist organization, which has a history of distorting casualty counts and staging provocations meant to draw Israeli fire toward civilians. Gaza’s Health Ministry, routinely relied upon for casualty numbers, is entirely a Hamas government body. 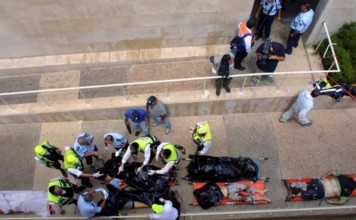