A couple of years ago after giving a speech, I was confronted with what struck me as a bizarre query during the question-and-answer period. Why, I was asked, hadn’t then-President Donald Trump ever expressed sympathy or condolences about the mass shooting that took place at the Tree of Life*Or L’Simcha Synagogue in Pittsburgh in October 2018? My surprise was only increased by the way several heads in the audience nodded in agreement when the question was posed.

In response, I explained that, whatever you might think of him, Trump had, in fact, issued formal statements of condolences about the crime—the deadliest in American Jewish history. A white nationalist, anti-Semitic, 46-year-old gunman had disrupted Shabbat-morning services at the synagogue in the Jewish neighborhood of Squirrel Hill, killing 11 worshippers, most of them elderly, and wounding six.

More than that, within days of the tragedy, Trump visited the synagogue along with his wife, Melania, daughter Ivanka and son-in-law and senior adviser Jared Kushner, as well as Treasury Secretary Steven Mnuchin. While they were warmly welcomed by Tree of Life Rabbi Jeffrey Myers, they were also greeted by a mass protest that drew several thousand people not only to express their dismay at the murders but to blame Trump for it—some of whom carried signs analogizing the president to Adolf Hitler and the Nazis.
Advertisement


That this drama had apparently escaped the memories of a lot of people was not entirely surprising. Much of the organized Jewish community had helped foment some of the distortions about Trump’s record, in which he was accused of being either an anti-Semite or an enabler of anti-Semitism. While his penchant for inflammatory statements and tweets had associated him with extreme rhetoric, his record as president was one of consistent opposition to anti-Semitism, including implementation of unprecedented policies against Jew-hatred on college campuses and record support for Israel.

But none of that—or his gesture after the Pittsburgh shooting—mattered to a Jewish public that was predisposed to accept the formulation that a person whose politics and style were so abhorrent to them that he must also be an anti-Semite. They also bought the false claims about him regarding the “Unite the Right” rally the year before in August 2017, saying that neo-Nazis who spewed anti-Jewish slogans in Charlottesville, Va., were “very fine people,” and considered it obvious that he must be seen as an enabler of the man who had committed the murders even if the killer had denounced Trump in his online rantings for being an ally of the Jews.

All of this was brought to mind this past week when reading accounts of President Joe Biden’s annual conference call with Reform, Conservative and Reconstructionist rabbis prior to Rosh Hashanah.

In the previous four years, similar calls with Trump were boycotted by representatives of left-wing Jewish groups. However, there were no such boycotts of Biden’s call by representatives of  movements that are often aligned with the policies of the Democratic Party and who were eager for a cheerful exchange of greetings and softball questions.

Yet during the course of the call, Biden said something that ought to have raised the hackles of his listeners.

While expressing concern about rising anti-Semitism, he said: “I remember spending time at the—you know, going to the—you know, the Tree of Life Synagogue, speaking with the—just—it just is amazing these things are happening—happening in America.”

It turns out that Biden never paid his respects at the site of the murders. This was confirmed when a reporter asked Bob Faige, the synagogue’s executive director, about it. Faige confirmed that Biden’s claim was false. Later, the White House attempted to cover for the president when a spokesperson said Biden had really meant to say that he had spoken on the phone with Rabbi Myers in 2019. But as even a sympathetic source like CNN noted, “A phone call is not the same thing. And if he had meant to correct his talk of ‘spending time at’ and ‘going to’ the synagogue by adding the part about ‘speaking with’ someone, he could have made that clear.”

Of course, he didn’t. And the lack of a response from the rabbis and leading Jewish groups who were most invested in trying to hold Trump accountable for his prevarications spoke volumes about the way partisanship controls Jewish discourse about anti-Semitism.

Biden has always had a friendly relationship with the Jewish community. But he’s just as well known for his own tendency towards fabulism. He has a long record of exaggerated and inflammatory rhetoric (his 2012 claim that Republicans will put blacks “back in chains”), plagiarism (such as his lifting British politician Neal Kinnock’s background and standard stump speech, and appropriating it as his own, despite the fact that Biden was not the first person in his family to graduate from college and wasn’t the descendant of coal miners). He told other tall tales about his academic credentials—another instance of stealing someone else’s work—and involvement in the civil-rights movement. Nor are such instances relegated to the distant past, as a surprisingly candid recent assessment from The New York Times about Biden’s lies and misinformation about his withdrawal from Afghanistan showed.

The reply to this from Biden’s supporters is obvious: What about Trump? They have a point. Trump had what was, at best, an often tenuous relationship with the truth, and he never hesitated to discard it if it would make a barb tossed at an opponent sharper or if it interfered with a boast that would make him look better. But since one of the main talking points used by Biden was the claim that he was restoring honesty and integrity to the White House, along with his other instances of mendacity, the president’s false claim about Pittsburgh chips away at that dubious narrative.

Yet the point here is not who wins this race to the bottom between two men who, reputations notwithstanding, have never been pillars of honesty.

Rather, it is that the treatment of both Biden and Trump by the organized Jewish community and those tasked with monitoring hate, like the Anti-Defamation League, isn’t just hypocritical; it has had a clear and negative impact on the Jewish community’s ability to combat anti-Semitism.

It’s clear that Trump was held to a different standard about anti-Semitism. He never praised and often condemned extremism, but he was nonetheless consistently bashed for being an enabler of hate by those who claimed his style was somehow encouraging anti-Semitism. By contrast, Biden not only has not been held accountable for an outrageously false statement about his solidarity with the Jews of Pittsburgh but hasn’t been pressed about his own very real connections to open anti-Semites.

By that, I refer to the caucus of left-wing Israel-haters known as “The Squad,” two of whose members—Reps. Ilhan Omar (D-Minn.) and Rashida Tlaib (D-Mich.)—whose instances of spreading anti-Semitic tropes and slanders is a matter of record. And, as we saw this past spring, such rhetoric can easily be seen as helping to foment the anti-Jewish violence that occurred in the streets in the aftermath of the latest fighting this spring between Israel and Hamas. Even since then, Tlaib, in particular, has been guilty of spreading conspiracy theories about Jews and supporters of Israel being responsible for the suffering of African-Americans.

What has longtime friend of the Jewish community Joe Biden said about that? Nothing. Nor was he asked about it or his support of Tlaib, whom he has praised as “a fighter” by his friendly audience during the Rosh Hashanah call.

Until Biden is willing to denounce those anti-Semites who are his political allies, he deserves no credit for opposing hate, let alone a pass for an egregious lie about Pittsburgh. And so long as Jewish discourse about the subject is so tainted by the dishonestly bred by the partisan biases of our leading groups, communal efforts to confront hate will never succeed. 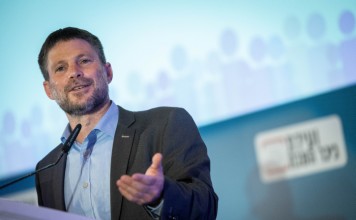