Nadler’s hearing was followed this past Monday by a stunning declaration in federal court by Manhattan DA Cyrus Vance, Jr. that, by the way, he was investigating possible broad ranging tax and insurance fraud by pre-presidency Donald Trump and some of his companies – in addition to the previously announced limited focus on the circumstances of possibly illegal payments of hush money.


Both laid bare some of the ominous fault lines plaguing our American democracy. It would do us all well to ponder how we got to the current point of implacable political division where rogue use of governmental authority is the order of the day – and how do we resolve it.

At the end of its recent term in June, the Supreme Court was faced with essentially the same question in two epic cases, and Chief Justice John Roberts wrote the Court’s opinion in both. One case involved the Judiciary Committee’s claim to virtually unlimited access to presidential information in the exercise of its constitutional oversight power to determine whether corrective legislation is ever necessary. President Trump maintained that a president was the head of a co-equal branch of government and therefore could resist the information demands of Congress.

The other case involved the efforts of the aforementioned Vance to subpoena Trump’s business and personal records in the normal course of an ordinary criminal investigation. Trump maintained that he was immune from local criminal investigation because our laws recognize that a president could not be distracted from his duties to lead the country by routine criminal proceedings.

In both cases, the Chief Justice found that a president did not enjoy total immunity and would have to acquiesce in the requests of Congress and local prosecutors if certain protocols – which he set forth – were met. Time will tell whether those conditions will make a difference or the rogue competition will continue unabated. The Nadler and Vance episodes, of course, suggest the latter. Yet Roberts’s observations in the run-up to the decisions he rendered provide an important insight into the problem.

In the Trump/Congress case Roberts commented,

Without limits on subpoena powers, Congress could “exert an imperious control” over the Executive Branch and aggrandize itself at the President’s expense…. We would have to be “blind” not to see what all others can see and understand that the subpoenas [i.e., requests for information] do not represent a run of the mill    legislative effort but rather a clash between rival branches of government over records of intense political interest for all involved…. [B]urdens imposed by a congressional subpoena should be carefully scrutinized, for they stem from a rival that has an ongoing relationship with the President and incentives to use subpoenas for institutional advantage.

As for the potential use of subpoenas to harass, we need not exhibit a naiveté    from which ordinary citizens are free. As we have recognized, a President is an easily identifiable target. There are more than 2,300 local prosecutors and district attorneys in the country. Many local prosecutors are elected, and many prosecutors have ambitions for higher elected office…. If a sitting President is intensely unpopular in a particular district – and that is a common condition – targeting the President may be an alluring and effective electoral strategy. (emphasis added and internal citations and quote marks omitted)

Readers might recall Vance’s serious political problems at the time he picked his fight with Trump. Indeed, Vance’s reelection was in serious doubt. And certainly that Manhattan continues as a hotbed of anti-Trump ferment is legend.

Sadly, their palpable hatred for Donald Trump seems to bring out the worst in his adversaries with unfortunate consequences for our country. Perhaps it is time for some mature reflection. 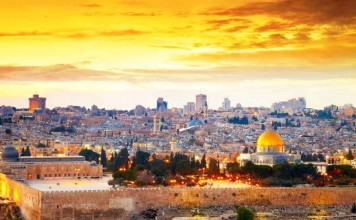 A Biblical Middle East On The Horizon?