The New York Times reported on Monday that the group called the American Studies Association (of almost 5000 members), approved a boycott resolution against Israel, by a 2-to-1 margin in an online balloting that concluded Sunday night, with about a quarter of the members voting (1,252).

The statement cited “Israel’s violations of international law and U.N. resolutions; the documented impact of the Israeli occupation on Palestinian scholars and students; the extent to which Israeli institutions of higher education are a party to state policies that violate human rights,” and other factors.


The American Studies Association has never before called for an academic boycott of any nation’s universities, said Curtis Marez, the group’s president and an associate professor of ethnic studies at the University of California, San Diego. He did not dispute that many nations, including many of Israel’s neighbors, are generally judged to have human rights records that are worse than Israel’s, or comparable, but he said, “one has to start somewhere.” This is only one example in a large and growing campaign of boycotts, divestment and sanctions (BDS) against Israel.

We live in a world where a people returning to it’s ancestral home is accused of occupation, and redemption has become colonialism. It’s a world in which discourse no longer exists, where tweeting and the dissemination of snippets of information dictate the course of events. We must rise above the elegant slogans of the left, and develop what Bertrand Russell called “immunity to eloquence.”

“Propaganda must not investigate the truth… and… present only that aspect of the truth which is favorable to its own side… The receptive powers of the masses are very restricted, and their understanding is feeble. On the other hand, they quickly forget. Such being the case, all effective propaganda must be confined to a few bare essentials and those must be expressed as far as possible in stereotyped formulas. These slogans should be persistently repeated until the very last individual has come to grasp the idea that has been put forward… Every change that is made in the subject of a propagandist message must always emphasize the same conclusion. The leading slogan must of course be illustrated in many ways and from several angles, but in the end one must always return to the assertion of the same formula.”

This quote is from Adolf Hitler’s Mein Kampf.

Slogans such as Occupation, and Land for Peace, advanced by the Muslim delegitimization campaign against Israel, groups like the ASA, and a hodgepodge of other left wing anti-Zionist and Antisemitic organizations, which appeal to a deep rooted and innate sense of justice, have become an integral part of the Israeli-Palestinian conflict.

The Palestine Liberation Organization (PLO) was created in 1964, and was one of many national liberation movements of that era. In its 1968 charter, the Palestine National Council (PNC) resolved that; Palestine is the homeland of the Arab Palestinian people; The Palestinian identity is a genuine, essential, and inherent characteristic; Zionism is a political movement organically associated with international imperialism. Nothing could be farther from the truth. Muslims have assimilated the principles of Nazi propaganda so well that today this perversity of reality is universally accepted, even by so called academics. They are even embraced and disseminated by the George Soros’ supported J Street, and other left wing American Jewish groups who are blind to he reality of the Middle East.

The land of Israel was first conquered by Joshua around 1200 BCE. The peoples who inhabited the land at the time are long extinct. Ever since then, the history of the People of Israel is a story of the victories, defeats, exiles, and redemption. The first wave of the Muslim conquests of the Land of Israel ushered in 465 years of nonstop war. Jerusalem fell in 638 after a long siege, Ashkelon fell in 644, while Caesarea endured a siege that lasted, off and on, for 7 years, and it was the last to fall. The Muslim Conquests that began at the start of the seventh century continued in waves until the creation of the State of Israel, which put an end to the repeated penetrations by Muslim invaders. The Muslim occupation of the land of Israel has been the longest continuous imperialistic and colonialist conquest in the history of mankind. 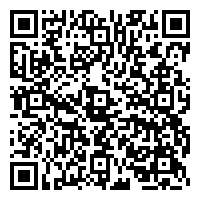