The New Year is marked by one commandment: the mitzvah of blowing the shofar. And yet the rabbis formulated the blessing before the actual performance thus: “…who has commanded us to listen to the sound of the shofar.”

How strange it is that the beginning of the New Year has no active commandment. Unlike Sukkot, during which we live in a booth for seven days, take the four species every single day, etc., and unlike Pesach, which is filled with many actions performed both before the advent of the holiday itself (searching for and burning the chametz) and on the Seder night, the New Year has only one commandment.

What are we being asked to do as the New Year begins? What does the sound of the shofar mean?

Rabbeinu Nissim comments that what we call Rosh Hashanah was actually the day man was created. For five days God formed and created a marvelous world of intense beauty in preparation for the crowning act: the creation of man.

It was a world that contained billions upon billions of galaxies in the heavens, as well as oceans, seas, lakes, and majestic mountains on earth. It was a world of perfection, and with each act that was completed God said it was good. And then, on the sixth and final day of creation, man was formed from the dust of the earth. And God saw that it was not good for man to be alone and therefore decided in His wisdom to create a partner that would be a “helper” in order to share in the building of the world.

And man was told he would have access to every single tree of the Garden of Eden, but as far as the “tree of knowledge” and its fruit he was commanded, “do not eat from it, for on the day you do you will surely die.” Thus, the first and only commandment was one of listening to the voice of the Creator. And the midrash, in the name of R’ Pinchas, says the reason for the command was so that Adam and Chava would constantly remember the Holy One Himself, the One Who had given them this one command.

But instead of listening to this divine command, Adam and Chava chose to follow the snake (some say the snake was actually the evil inclination or man’s internal conscience). And Chava ate from the forbidden fruit and gave it to Adam. It is then that they both heard the “voice of God walking in the Garden itself.” And God turned to them and asked a seemingly insignificant question: “Where are you?”

Rabbi Shneur Zalman, the Alter Rebbe, comments that the question was not only posed to the first man and woman but has meaning for every generation. Asked the Alter Rebbe: “Did God not know where Adam was?” And he explained that “where are you?” is God’s perpetual call to every man. Where are you in the world? You, who have been allotted a certain number of days, hours, and minutes to fulfill your mission in life; where are you? What have you accomplished?

A totally different explanation of man’s attempt to “hide” from God in the aftermath of the sin is given by the biblical commentator Cassuto: “Why do man and his wife choose to hide among the trees of the garden?” Was there no other place than the scene of the crime? He answers that the text seems to be hinting that even when a person attempts to forget or hide his transgression, he cannot silence the voice of his own conscience and erase the footprints of his actions. No matter how far we try to remove ourselves from our responsibilities, we cannot escape what we have done. Always the voice of “where are you?” will follow us.

R’ Shneur Zalman and Cassuto agree that the voices of God and man on that sixth day of creation reverberate throughout time. And just like the voice of “where are you” signifies a message, so too the sounds of the shofar have messages for us. They call on us to take an accounting of our lives and actions to determine where we have been and where we are going.

The sounds of the shofar, however, are not limited, but are different. First, we always begin with the straight sound of the tekiah. That is followed by the broken sounds of shevarim and teruah. But we always end each section with the straight sound of the tekiah at the end. The sounds of the shofar, in essence, are the voices of man –our own voices and our own conscience. While we start any process, project, or even the year ahead with a clear path to accomplishing our goals, we often suffer setbacks, hurdles, or mistakes. These are the personal shevarim, which are brief – but sometimes they can be longer or more difficult; these are the sounds of teruah. What the return to the tekiah tells us is that there is always a way to return, to go back to the path we have chosen and the goals we set out for ourselves.

For the past several weeks we have been reading the words of consolation from the prophet Isaiah. We began reading his words of comfort nachamu, nachamu (comfort ye, comfort ye) after the ninth of Av, which marks the destruction of the Holy Temple and many other national tragedies in Jewish history. These were all shevarim, tremendous setbacks to our people. But after all the words of consolation we come to the very last one where we read about the eventual redemption of Israel with the following beautiful words: “I will rejoice in God…for he has clothed me with the garments of salvation, the cloak of charity-just like those of the high priest and the jewelry of a bride.”

In the Garden of Eden man and woman clothed themselves with fig leaves following their sin, but in the future it will be God who will “clothe” the Jewish people and all mankind with the purest of garments. They are the garments that were worn by the high priest as he entered the Holy of Holies in order to offer the incense offering. And these are the special jewels that are worn by the bride as she prepares herself for the marriage ceremony.

The sounds of the shofar bring us back to our encounter with our Creator and with ourselves. And they are the sounds that remind us of our holiness and our spiritual goals.

May this year be one of blessings and accomplishments. Shanah Tovah. 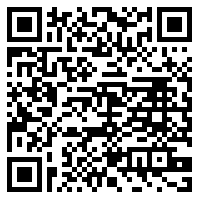