The wise men of Chelm.

Yesterday we learned that the Jewish National Fund (KK”L) is carrying out a tree planting operation in the areas near the Gaza border. This is in response to the kite terror that destroyed thousands of acres of fields, forests and farms. At the same time, reservists are being mobilized – to fly drones like children, to intercept some of the terror-balloons.


There will certainly be those who will see this as “an appropriate Zionist response to Gaza terrorism.” But what can you do when the first thing that came to my mind when I heard about it, was the well-known story about the wise men of Chelm.

One day a hole opened up on the bridge to the city of Chelm, and every day people crossing the bridge fell through the hole and were injured. So the wise men of Chelm, instead of repairing the ruined bridge, decided to build the hospital under it…

Do you want a real answer to the kite terrorism?

We must expel all those who hate Israel from the Gaza Strip.

The route should be completely opened to the South – the Sinai, in coordination with Egypt and with American backing, and from there to help the refugees settle in the countries of the world.

Indeed, this is a very complicated solution, as it will take time until there is a Jewish government that’s willing to solve the problem at its root.

Until then, there is another solution that will, at least temporarily, stop this danger – the kite launchers should be treated as terrorists in every way, and the IDF should shoot them and those who send them utilizing snipers, drones, helicopters and all the other weapons in the hands of the IDF.

I’m willing to give some more helpful advice. But planting trees? So the Gazans will burn them down too when they grow up. And then what? The Jewish National Fund will conduct yet another Zionist campaign to plant more forests, while the terrorists are still there? Indeed, the wise men of Chelm.

This was nothing more than an allegory – but an allegory that is happening in reality – in every single way the State of Israel chooses to contend with Arab terrorism. Instead of uprooting the problem, a hospital is being built under the bridge… 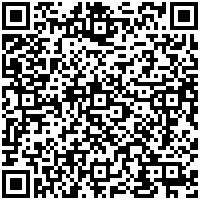