As a general rule, asher yatzar, the blessing recited after one relieves oneself, must be recited immediately after using the washroom and washing one’s hands.1 There is some discussion, however, as to how long one actually has to recite asher yatzar in the event that it was not recited right away.

According to some authorities, there is actually no set time limit and it may be recited anytime one remembers.2 For example, the Levush discusses a case in which one went to the washroom in the middle of the night but did not recite asher yatzar at the time due to an inability to wash one’s hands. The Levush rules that the asher yatzar may be recited in the morning even if one does not relieve oneself upon awakening.3 Similarly, there are those who rule that one who goes to the bathroom several times during the night need not recite asher yatzar each time and need merely recite it once in the morning.4 Again, this is true even if one does not relieve oneself again upon awakening. Indeed, a number of authorities rule likewise and assert unequivocally that asher yatzar is not subject to any deadline or time limit.5 There is even a view that one who forgot to recite asher yatzar after relieving oneself and then remembers the omission after relieving oneself again some time later is to recite asher yatzar twice, one after the other.6 However, the halacha is not in accordance with this view.7


Other authorities disagree and argue that if Birkat Hamazon, which is d’oraita, has a time limit (generally assumed to be 72 minutes8 or until the food is digested9) then certainly asher yatzar must have a time limit as well.10 Opinions as to such a time limit vary from a 30-minute deadline11 up to those who suggest a 72-minute deadline.12 The most widely accepted opinion on the matter is that one may recite asher yatzar up until one feels the urge to relieve oneself again.13

One who relieves oneself at the very end of a meal should recite asher yatzar before reciting Birkat Hamazon or any other bracha achrona. There are two reasons for this. One reason is due to the general principle of “tadir v’she’aino tadir – tadir kodem” – when one has two mitzvot to perform, one should perform the more frequently occurring mitzvah first. In our case, since asher yatzar is recited many times each day, certainly more than the Birkat Hamazon or other bracha achrona, then it should be recited first. The other reason is that since a person becomes obligated to praise G-d for the perfection of his body immediately after using the washroom, it takes priority since there is no immediate requirement to recite the Birkat Hamazon or other bracha achrona.14

There is some discussion whether asher yatzar should be recited by one who is suffering from a stomach condition or is otherwise relieving oneself repeatedly. According to some authorities, one who knows that one will end up back in the washroom in a short while due to the condition should not recite asher yatzar each time. Rather, one should only recite it when the eliminations appear to have been completed, at least for the short term.15 Others rule that one is to recite asher yatzar after each elimination regardless of any other considerations.16

There is a dispute whether asher yatzar is considered to be a birkat hashevach (a blessing of praise) or birkat hanehenin (a blessing for experiencing pleasure).17

It suffices to merely be wearing an undergarment that covers one’s private area(s) when reciting asher yatzar18 though some authorities require one to be properly dressed.19 There is an opinion, based on considerations of modesty, that women should recite asher yatzar silently and inconspicuously when in the presence of men.20 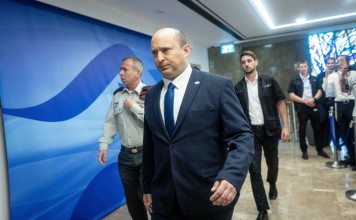