A Case Of Mistaken Identity
‘And Two Cooked Foods’
(Pesachim 114a)


We customarily place a roasted foreleg (zero’a) and an egg on the Seder plate. The Gemara (infra. 114b) explains that these represent, respectively, the Korban Pesach and Korban Chagigah, which were eaten Pesach night when the Beis HaMikdash stood.

The Tur and Shulchan Aruch (Orach Chayim 473:4) cite this Gemara and add that the zero’a should be roasted just as the Korban Pesach was. The egg may either be cooked or roasted, as was the Korban Chagigah.

The source for using specifically a foreleg and an egg is Kol Bo, a sefer on halacha and minhag authored by Rabbi Aharon of Lunil, a 14th century Rishon. Kol Bo (50) states, in the name of the Talmud Yerushalmi, that these two foods signify our redemption from Egypt. “Egg” in Aramaic is “bei’a,” which also means to desire. Together with the foreleg, it represents Hashem’s desire to stretch out His mighty arm to redeem us from Egypt (see Mishnah Berurah, s.k. 27).

The Mishnah states that if a community has this custom, it’s forbidden to go against it. The Tur (Orach Chayim 476) and Magen Avraham (ibid., s.k. 1) write that this custom was accepted among Ashkenazim. Poskim write that in places where it’s customary to allow roasted meat to be eaten on the night of the Seder, one should still refrain from eating the zero’a since it’s specifically meant to represent the Korban Pesach (Teshuvos Mahariv 193, et. al.).

All Meat And Fowl

The custom not to eat the zero’a applies even if it’s taken from a cow or chicken (Shulchan Aruch 476:2). Although only lambs and kid-goats were used for the Korban Pesach, the prohibition not to eat roasted meat extends to the meat of any animal that requires slaughtering since it somewhat resembles the Korban Pesach.

Poskim add that although the Korban Pesach was roasted directly over an open fire, meat roasted in a pot should also not be eaten on the night of the Seder since it resembles the Korban Pesach.

If meat is cooked and then roasted, it should not be eaten even though such meat would be unfit for the Korban Pesach since it appears roasted. However, if it’s roasted and then cooked, it may be eaten since it doesn’t resemble a roasted Korban Pesach at all (see Mishnah Berurah 476:1). 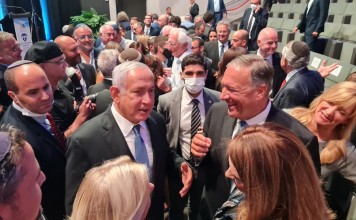 David Friedman’s ‘The Abraham Accords’ Comes to Life, and the Big Screen, at Gala Jerusalem Premiere