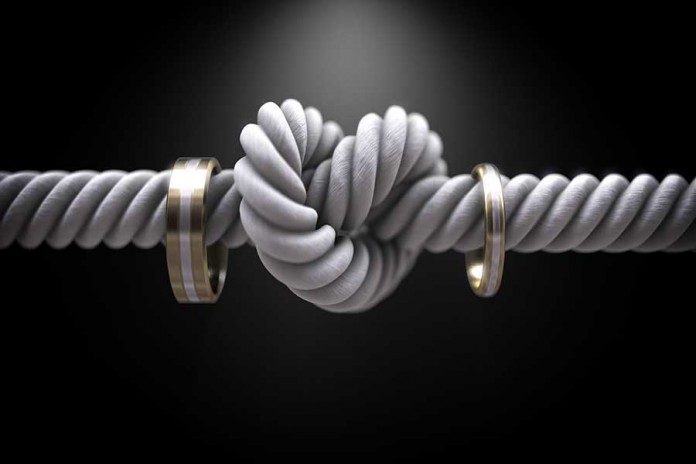 How should we treat friends and family members who intermarry?

Each situation is unique and needs to be evaluated separately. There isn’t one correct or effective answer to this question.

Halacha distinguishes between a mumar le-tei’avon (one who sins for personal pleasure) and a mumar le-hach’is (one who sins defiantly). Often, Jews who intermarry are in the first category. They happened to meet a non-Jewish person, entered a friendly relationship, and fell in love. Such individuals may still maintain a strong Jewish identity and may want their children to be raised as Jews. In these cases, it often is best to maintain cordial relationships with the intermarried relative or friend in the hope that they will eventually come closer. Perhaps their non-Jewish spouse will convert.

When a Jewish woman intermarries, her children will be halachically Jewish. We certainly would want the children to be raised as Jewishly as possible. Alienating their mother would be counter-productive.

In the case of a mumar le-hach’is, we would naturally feel less conciliatory. The person has willfully and spitefully chosen to break with the Jewish people. We would have strong feelings of betrayal. Yet, even in these cases, we need to consider the Jewishness of future children. Even if the mumar le-hach’is deeply disappoints us, we should think long and hard before cutting off all connections with him or her.

Intermarriage rates continue to rise, and the Orthodox community is not immune. The stigma that once attached to intermarriage has been diminishing even among many who identify as Orthodox Jews. Whether we like it or not, dealing with intermarried relatives and friends is an ongoing challenge. The quality of chesed is an important asset.

– Rabbi Marc D. Angel is the director of the Institute for Jewish Ideas and Ideals

There was a time not too long ago when intermarriage was a red line that even impious Jews knew not to cross. And if they did, they were ostracized. That changed approximately fifty years ago, probably because of the skyrocketing number of intermarriages as well as an increased number of other Jews who were also no longer that pious.

The results should have been anticipated. In economics, as in life, you get less of something when you penalize it, and more of something when you subsidize it. Consequently, the more intermarriage becomes acceptable among family and friends, the more they occur, to the point that most marriages involving Jews in America today are intermarriages. In the non-Orthodox community, the rate of intermarriages is over 70%, an astronomical figure that does not bode well for the future of American Jewry.

As a result, there are incessant demands to tolerate and even celebrate intermarriages. There are constant efforts to reform the Torah, to see the bright side and to remove any remaining stigma. These are all foolhardy and reflect a lack of Jewish commitment and an excess of unconditional love – a concept, unknown to Jewish parenting, that has been fabricated to rationalize acceptance of all sorts of bad behavior.

Friends are ordinarily those with whom one has shared values and interests. It is hard to imagine Jews having shared values with those who intermarry. Dealing with family members is more problematic, as we are admonished not to turn away from our own flesh (Yeshayahu 58:7) and we could possibly be a good influence even on miscreants. Certainly, Jews should not participate in intermarriages, whether family or friends. Besides being forbidden, how can any Jew celebrate an event that heralds the demise of the Jewish people?

A relationship should be retained, doors should be kept open, but without acquiescence in a grave sin, which itself sets a bad example for children, friends, and the community. May Hashem spare us such tzarot!

In the past, when an individual married a non-Jew, the family sat shiva and mourned him as if he died. Obviously, the rest of religious society totally shunned him and treated him with total rejection. This was both to signify that intermarriage was a supreme expression of cutting oneself off totally from the Jewish people and its past and future. It also functioned as a deterrent to others from intermarrying.

However, in light of the sorry state of Jewish society today, such a reaction would accomplish nothing positive as secular Jewish society does not view intermarriage as an evil (and are anyway alienated from Jewish tradition and therefore would view such conduct as fanatic, discriminatory and totally irrelevant). It therefore would not be a deterrent, and perhaps even result in the opposite reaction. Additionally, statistics show that a large percentage of intermarriages do not last long.

Therefore, the modus operandi is for the observant relative to make it clear that they do not condone the intermarriage and don’t accept it as a valid marriage at all. Hence, any action that would signify acceptance, such as attending the wedding or hosting the couple as man and wife, would be prohibited. However, the line of communication and family ties to the Jewish individual should be maintained, and being cordial to the non-Jewish individual, is proper, with the hope that perhaps this will enable a positive influence either on the rebound if the marriage breaks up or to enable kiruv to influence the couple to consider a bona fide halachic conversion entailing a true and sincere embracing of a Torah life. (Although we do not encourage conversion and initially discourage prospective converts, in this situation many poskim say that depending on the circumstances a positive influence to seek a halachic conversion is sometimes warranted.)

As in every situation a qualified halachic source should be consulted as to what the proper Torah conduct should be, based on the specific factors relevant to that specific situation.

– Rabbi Zev Leff, rav of Moshav Matisyahu, is a popular lecturer and educator.