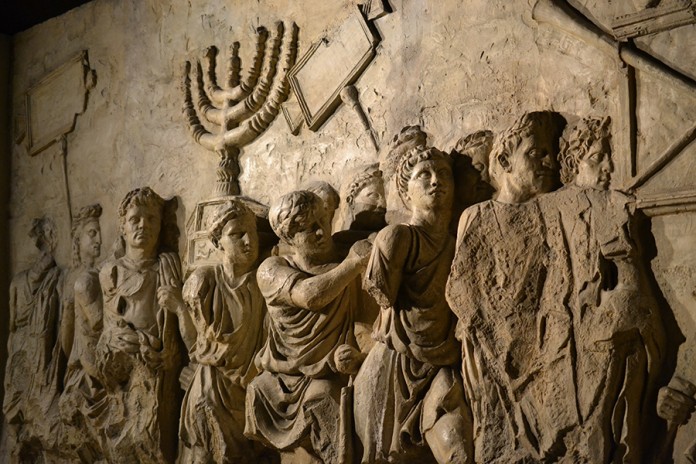 The Menorah is certainly the number one item from the Beit HaMikdash that is most embedded in our memory and identity. The Menorah, of course, also serves as the emblem of the State of Israel and, by extension, as the symbol of the reestablishment of Jewish sovereignty in the Land of Israel. The Menorah was the first symbol ever to represent the Jewish people – the Magen David was not used for this purpose until quite some time later.

Furthermore, most people assume that the Menorah had curved branches facing upward, protruding from the center stem of the Menorah. This shape is referred to as an “upside-down rainbow.” Although this is indeed the view of a number of authorities,3 the Rambam, however, is noted for illustrating the branches of the Menorah as extending diagonally upward from the center stem at a 45-degree angle. The idea of diagonal branches is supported by no less an authority than Rashi.4 Nevertheless, virtually all ancient drawings and paintings of the Menorah depict it with rounded branches. Even coins uncovered from the biblical and Talmudic era depict the Menorah with rounded branches, as do all the mosaics and ossuary markings. Furthermore, the Rambam himself writes that his drawings are for illustrative purposes only and are not necessarily to be taken literally. It is difficult to determine, however, which aspects of the Rambam’s illustrations are literal and which are illustrative.

Normative halacha is in accordance with the view that it is only forbidden to construct a Menorah that could be used in the Beit HaMikdash. As such, a Menorah that would be disqualified for use in the Beit HaMikdash may be constructed, such as a Menorah of plastic or wood.9 So too, some permit making a seven-branched menorah if the center stem is not intended to hold a candle or oil but is rather made into an artistic design.10 Rav Shlomo Leib Mund (Montreal/Beit Shemesh) suggests that a Menorah that does not hold the minimum quantity of oil that was used in the Menorah of the Beit HaMikdash, namely half a log (about 150 ml), may be enough of a change to permit constructing one, even if it resembles the Menorah of the Beit HaMikdash in every other way. Indeed, it might just be that the reason many of the earlier authorities forbade constructing a Menorah was that, in those days, people commonly used candelabras that contained about half a log of oil.