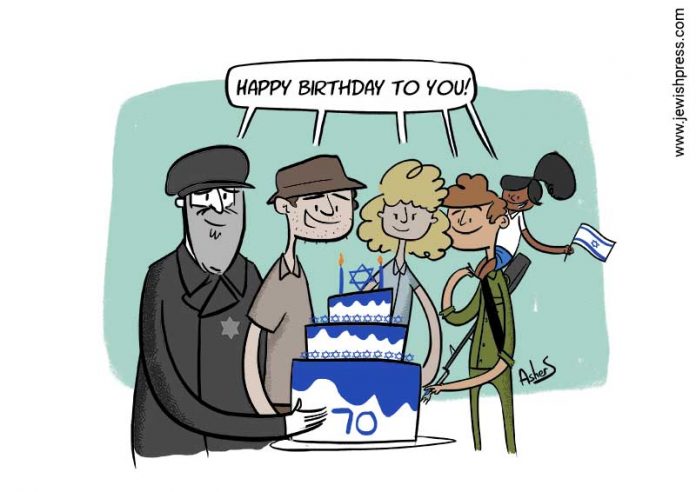 But this year – more than ever – it is imperative to thank Hashem for the great miracle of the establishment of the State of Israel. Seventy-two years ago, we were a collection of survivors – dry bones that had survived the Holocaust and the pogroms that preceded it. Today, Israel is one of the top seven countries in the fight against the coronavirus.

We are the “start-up nation” – an empire of science and technology that has one of the world’s strongest militaries. In a world that’s experiencing tens of thousands of casualties from the coronavirus pandemic, Israel is one of the safest countries on earth. Specifically this year on Yom HaAtzma’ut, I believe we should say Shehecheyanu – “who has given us life, sustained us, and helped us to reach this moment.”

The Chatam Sofer paskens that a community that experienced a miraculous salvation can designate a special Yom Tov to commemorate it. He writes, “This is the custom of some communities and a few great individuals…. However, this is valid only for a great miraculous salvation from death to life, as in the days of Mordechai and Esther” (Responsa Chatam Sofer, Orach Chaim 1:191).

Rabbi Meshulam Rata, a dayan in the Great Rabbinical Court and a member of the Chief Rabbinate Council when the State of Israel was established, argues that this ruling is most relevant to Yom HaAtzma’ut:

“There is no doubt that it is a mitzvah to make this day [the 5th of Iyar] that was set…as a memorial of the miracle of our salvation and freedom into a day of rejoicing as on a holiday and say Hallel… And it is obvious that in our case…that this involves a redemption from slavery to freedom, for we were redeemed from subjugation to other nations…and this is also a case of redemption from death to life, for we were saved from the hands of our enemies who arose to destroy us” (Responsa Kol Mevasar 1:21).

Further on, Rabbi Rata notes that saying Shehecheyanu on Yom HaAtzma’ut is halachically not problematic for those who feel genuine joy at the rebirth of the state. He bases his position on the Bach, who writes that a person who feels genuine joy in his heart need not be concerned about making an unnecessary Shehecheyanu.

In fact, Rabbi Rata concludes that “those who genuinely enjoy and rejoice in the event of the state’s revival…their blessing is not just an option but rather an obligation” (emphasis added).

More than 60 years before Israel was established, the Sfat Emet predicted Yom HaAtzma’ut. He writes that each biblical festival gave our nation the power to establish a parallel rabbinical festival: “Chanukah is a reflection of Sukkot, and Purim is a reflection of Shavuot. And regarding Pesach, we hope to establish another corresponding festival, as it was said, ‘I will show him wondrous deeds as in the days when You left the land of Egypt.'” (Sefat Emet, Chanukah, 1881).

For 2,000 years, we waited for the third rabbinical festival – which derives its power from Pesach, the ancient festival of liberty – to complete the series. Now it’s here.

Seventy-five years ago, the Holocaust ended with six million Jews brutally murdered. Three years later, the State of Israel was founded with a population of slightly more than 600,000 – the number produced by the census of the people right after the Exodus and a number that our Sages say is the minimum for the establishment of a nation in the State of Israel:

“Ulla said, ‘We have a tradition that there is no congregation in Babylonia. The Rabbis taught, ‘A congregation is no fewer than 600,000 people’” (Berachot 58a). The Gemara presents two conditions to define the Jewish people: a location and a quantity, the Land of Israel and 600,000.

The number of Jews currently living in Israel is over 6.7 million, which means that more than six million Jews have been added to Israel’s population since the establishment of the state. Moreover, for the first time since the destruction of the First Temple, Israel is home to the largest population of Jews in the world. According to some leading demographers, within a few years the majority of the world’s Jews will reside in Israel – a fact that has profound halachic implications.

There is no doubt that, without exaggeration, we can say today that the Jewish people’s successful return to the Land of Israel after 2,000 years of exile, persecution, massacres, and assimilation is one of the greatest miracles the Jewish people has ever experienced. That’s why on Yom HaAtzma’ut we must lift our heads, acknowledge the great miracle, and bless the Almighty “who has given us life, sustained us, and helped us to reach this moment.”

Chief Rabbi Shlomo Goren also ruled that one should say Shehecheyanu on Yom HaAtzma’ut. One year, Rabbi Goren celebrated Yom HaAtzma’ut in one of the religious kibbutzim and made the beracha with great enthusiasm. When people asked him why he recited the blessing, he replied with typical sarcasm: “Don’t worry, I have a new tie.”

Anyone who is still unsure whether the resurrection of the Jewish state is sufficient reason to say Shehecheyanu is welcome to purchase a new tie!

Chag same’ach and prayers for good health for Israel and the entire world.