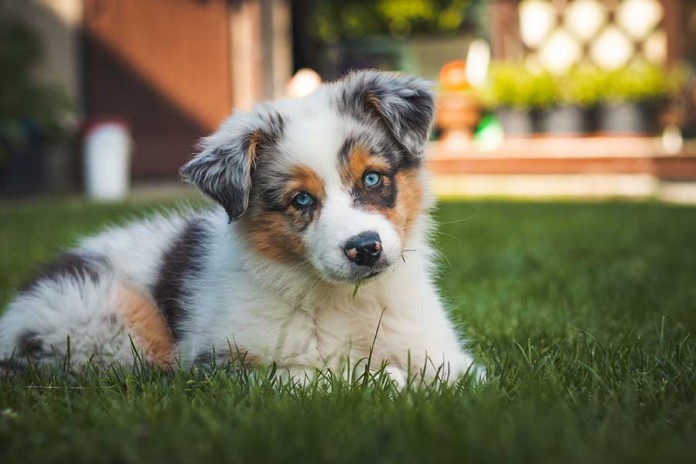 I have long-professed that HaKadosh Baruch Hu has a wonderful sense of humor and an incredibly keen sense of irony… That would certainly begin to explain why I, Naama Klein, who was bitten (okay, nipped) by a dog at age three, and who has since harbored an understandable fear of those four-legged creatures, is now the very surprised, and often surprisingly proud, Savta of two granddogs! I kid you not!

When my son and daughter-in-law were seriously considering making aliyah with their three young children, someone suggested that having a family dog move to Israel with them could possibly help ease that very difficult transition. The next thing we knew, they were shopping around for the perfect furry candidate. And several misses later, they found her: Kelly,* a white and brown beauty with the most striking ice-blue eyes!

My husband and I were admittedly somewhat skeptical about the idea from the get-go, and absolutely shocked to hear how expensive and complicated it is to ship a dog to the Holy Land. But, like all parents and in-laws, we were trained to keep our opinions to ourselves and help our kids in every way, despite our misgivings… Including my husband waking up in the wee hours one morning, a few weeks prior to the scheduled aliyah date, to pick Kelly up from Ben Gurion Airport and drive her to a local kennel to sit out her isolation period before the new olim’s arrival.

Did Kelly help our children and grandchildren with their aliyah process? Hard to say. The coronavirus made everything exponentially more difficult, so we may never know for sure… But one thing that there’s absolutely no doubt about whatsoever is that Kelly became a beloved member of their family, and by extension, ours as well.

So much so that, a year or so later, when my kids heard about a new litter of puppies being sold relatively inexpensively, they opted to add another dog to their motley crew. But, while their latest addition was content to find a quiet corner in the yard, on the couch, virtually anywhere! to curl up and go to sleep at pretty much any given time of day or night, his older sister, Kelly, remained as boisterous and leibidik as ever.

Kelly regularly jumped up to greet me in her signature style, licking me exuberantly while rhythmically wagging her tail. Well, she certainly knew how to make a guest feel welcome (if not utterly terrified!). In time we all got used to Kelly’s over-the-top behavior (and her younger brother’s sad puppy eyes and low-key demeanor), and aside from the occasional noise complaint by one chronically cranky neighbor, all was well with the new olim, their two very different dogs, and seemingly the world at large.

My children and grandchildren b’H happily settled into their lovely garden apartment, their block, and the wider community, and amassed an impressive circle of friends. Once Corona became less of a nightmare, they frequently invited their neighbors and new-found friends for Shabbos meals, and even more often were invited out. Their own children, for their part, were seldom seen without several new BFF’s in tow.

In fact, I often joked that I should consider getting a dog of my own, because my kids and grandkids seemingly daily, and apparently effortlessly, made countless new friends at the “dog park.” Maybe there was still some hope for me to reclaim my own social life as well!

During their acclimation to Israel, my children had adopted the Israeli siesta, taking time off from work and other responsibilities to enjoy a short restorative nap during the hot afternoon hours. They really appreciated that brief respite, and were usually able to adjust their schedules to take advantage of that worthwhile opportunity.

A couple of years passed rather uneventfully, and then the chofesh hagadol, aka summer vacation, aptly nicknamed the ‘onesh hagadol’ or huge punishment (by long-suffering parents), was upon us once again.

My kids found a private day camp for the two younger kids, and although the kids loved the program and relished spending time with their friends, the major downside was that it ended at 1:30 p.m. each day.

Now that their kids were no longer in school, but already home at that time, my kids were not quite sure whether they could continue with their chosen siesta routine, but they decided to give it a try. So after they made sure the kids had plenty to eat and drink, they settled them comfortably in the air-conditioned living room with ample fun activities to keep them happily and quietly occupied, and then retired to their bedroom for their afternoon nap. However, Kelly, who routinely joined them for the daily siesta, soon began pacing and barking in agitation. Realizing that they would not get a moment’s rest under the circumstances, my daughter-in-law opened the bedroom door to let her out. Kelly immediately bolted out and then ran to the front door, barking loudly and purposefully. My daughter-in-law opened the front door for the frantic dog, thinking that she just wanted to run around in the fresh air.

But Kelly frantically raced off to the side of the house, barking even louder. The sight that greeted my daughter’s eyes made her blood run cold: There were her two young children – no longer on the couch, but in the backyardv– or more accurately, inside their large and very deep above-ground family pool! Kelly’s quick-thinking had not only saved the day, but quite possibly their young lives as well!

Our kids told over this story with a decided mixture of awe and profound gratitude. Needless to say, Kelly achieved instant hero status in our book too.

And, as much as I hesitate to admit it, it looks like there’s now one more reason for a professed non-dog-lover like me to consider getting a furry four-legged best friend of my own.