In my March 4 column, “What’s Happening in the World? – I’m Afraid,” I featured letters from two women who wrote of their fear at what is going on in the world. The second letter, from a Holocaust survivor, was particularly descriptive, as the woman decried the escalation of anti-Semitism, the savage terror attacks in every country, and the barbaric, murderous attacks on our people in Eretz Yisrael.

That second letter evoked much comment. In last week’s column a self-described secular Jewish student at UCLA wrote that he felt Jews are suffering from “paranoia” and tend to see anti-Semitism lurking behind every door. He also stated that Jews have remained oblivious to our new democratic worldthat is intolerant of bias and prejudice.


That letter prompted an avalanche of e-mails of which I will share just two – one from a gentile, the other from a son of Holocaust survivors.

Letter 1: A Non-Jew Speaks Up

I wrote to you last week in response to the woman who feared for this world (I agreed). I want to send a quick follow-up message regarding the very thoughtful letter from the Jewish student at UCLA. I read and understand what he says, but in your answer, please emphasize that anti-Semitism is huge. It is still with us (along with all other prejudices) and has grown exponentially, to the point where it is now acceptable in even the most revered circles – not only in Hollywood and the entertainment and fashion industries but all areas of society throughout the world.

As I said in my earlier letter to you, I am a non-Jew but I hear and am sensitive to such comments.

They are not always as in-your-face ugly as those made by the designer Galliano (incidentally, does he have any clue as to the history of the fashion industry or to the identities of a vast number of its clientele?). Most forms of bias start subtly, but are consequential, leading up to pogroms and Holocausts.

The UCLA student may be forgiven for his youth – I too was once young – and I am still a basically tolerant and in many areas a liberal person, but not when it comes to dealing with individuals and systems whose sole intent is the annihilation of another group or groups of people. Look where that got us in the 1930s. Is history so hard to learn? It is happening again, and you and a few others called it.

I certainly don’t want to be a Chicken Little over every little perceived incident of insult or wrongdoing, but the blatant anti-Semitism evidenced in today’s media venues is real and will kill us all if left unchecked. A young, idealistic student has a lot to learn, and he will, but the majority of people – Jewish and non-Jewish, young and not so young – turn their heads away or dismiss these incidents as non-lethal expressions of freedom of speech.

I am all for freedom of speech and expression, even ugly speech and expression, but that does not mean I do not take these utterances seriously or that I dismiss them as “just words.” I pay attention and I take note. I also vote. I will never support any candidate who does not respond decisively against persons and organizations espousing any sort of anti-Semitism. Everybody has a stake in this. Our world is very small and it won’t take much to destroy it. That young Jewish UCLA student reminded me of a young African American girl I knew several years ago who told me there is no longer any racism – we are now a “post-racial” society.

Only the young can proclaim the death of prejudice. It is both a blessing and a curse to be so idealistic. You and other Holocaust survivors are the still-vibrant reminders of what can and will happen if we ignore the clarion call of evildoers. It’s a shame, because they tell us far in advance what they intend to do to us. What could be clearer?

Letter 2: A Child of Holocaust Survivors

I was appalled by the letter from that secular Jewish UCLA student. I know there are many Jews who are disconnected from their people and their heritage, but in this letter I detected a sentiment that bordered on Jewish self-hate. It’s one thing to be non-observant but something else again to accuse your own brethren of paranoia at a time when blatant anti-Semitism saturates the world.

I am the child of survivors. Both my mother and father experienced barbaric torture and unremitting agony in the death camps of Hitler. They emerged from that nightmare as living skeletons – forever scarred by that unspeakable, satanic evil that was thrust upon them. If my parents, of blessed memory, were alive today and were to read the letter from that UCLA student, they would tremble in disbelief. They would cry out and ask, “Could it be that a Jewish student would deny the continued existence of anti-Semitism when survivors of the Holocaust are still alive? When concentration camps, gas chambers and crematoria are still standing in place testifying to the unremitting horror of what occurred there? Could it be?”

As the child of survivors, I believed that Jews, no matter their persuasion, share this collective pain of the Holocaust that is forever engraved upon every Jewish heart and soul.

To my great shock, I’ve slowly discovered this is not the case. Not only are there those among us who believe the Holocaust has been overplayed, that it’s time to forget it and move on; there are also those among us who believe Jews are guilty of bias against Arabs and are blind to the suffering of the Muslims – the new downtrodden, exploited people of our generation. Sadly, many Jews have become “self-haters” and have joined forces with those who scheme to annihilate us – and even more Jews have chosen to abandon ship and have disassociated themselves from their people and their heritage.

Not only is that UCLA student off the mark, not only does he have a self-hating attitude, but he has obviously joined with those who hate us and hide their anti-Semitism behind the cloak of anti-Zionism – and he refuses to understand that, in the end, it is all the same: anti-Zionism is the politically correct way of expressing anti-Semitism.

I hope you will publish my letter and I anxiously await your response to this misguided student. 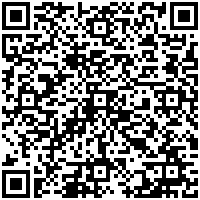