U.S. Secretary of State John Kerry phoned Mahmoud Abbas, and Israeli negotiator Tzipi Livni sat down with her counterpart Saeb Erekat Wednesday, proving that the best way to get both sides talking is to create a crisis.

Livni officially is Justice Minister and unofficially is Kerry’s Under Secretary of Concessions. She talked tough earlier in the day, declaring that the Palestinian Authority “has breached its obligations by applying to the United Nations” and that “if they want a state, they need to understand that it will only be established on the negotiating table.”


Livni is good at talking tough. She is an abysmal failure at even showing a muscle, let alone using it.

She sat down with Erekat and Martin Indyk, President Obama’s Middle East salesman. Even before the discussion, she already was parroting the State Dept. line. “Even when peace seems very far away, and when the other side’s conduct is wrong,… we will return to the negotiating table; we are obligated to return to talks.”

A real fighter she is.

She said so herself, asserting that neither the Palestinian Authority  nor anyone else “can dictate to us whether or not we are fighting for peace.” Her idea of fighting for peace is hitting Israel over the head. Maybe if she hits herself on the head something will sink in, but until then, we can expect luvvy-duvvy words by tomorrow morning on how Erekat really is a peace partner and that the peace talks can be saved, meaning Kerry can be saved.

Despite all the headlines reporting the play-by-play of an imminent collapse in talks, Abbas and Erekat are not about to walk away without the release of the fourth batch of terrorists. Joining the he Convention on the Rights of Persons with Disabilities, one of 15 U.N.-linked bodies that have received an official Palestinian Authority request for membership, is not going help get the murderers out of jail.

Kerry kept up contact with Abbas on Wednesday, phoning him and getting assurance that they would continue to talk in the next few days.

Netanyahu has been conspicuously silent, enjoying a rare moment of peace and quiet while everyone else runs around and bumps into each other, knocks each other down and then tries to pick up the pieces. 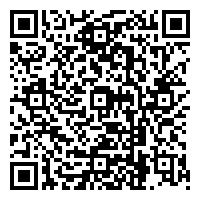