Hub Etzion is a new, vibrant and exciting coworking space located in the burgeoning “Industrial Park” nestled in the Gush Etzion hills just across from the town of Efrat, and 5 minutes from almost every community in Gush Etzion. As coworking hubs go, Hub Etzion is pretty standard – even modest. At 3000 sq. feet, it’s quite small compared to the 15000+ sq. feet WeWork locations in Tel Aviv and Herzliyah.

Yet in the mere two months since opening, Hub Etzion has been receiving national – and international attention. Including, a special visit today from MK and Former Israel Ambassador to the US Michael Oren.

While Gush Etzion has been in the news lately as the address for increased terror attacks, and notably the vicious murder of American yeshiva student Ezra Schwartz, z”l one month ago, it is also the home to a large, independent-minded community of Olim, many of whom live in Israel while owning or consulting for companies overseas, from the comfort, or shall we say, the discomfort of home.

Hub Etzion aims to meet this strong and current market need, providing a sophisticated, professional space in which to work for those who telecommute, run their own businesses, work from home or all of the above.

At the same time, the founders of Hub Etzion perceive their business as a response to the ongoing terror attempts – and to BDS.

“Yesterday, I went to a memorial ceremony at Oz V’Gaon Park in memory of Ezra Schwartz, z”l” Hub Etzion co-owner and founder Rachel Moore told JewishPress.com. “Racheli Fraenkel [JP: mother of Naftali Fraenkel one of the three boys kidnapped and murdered last year] spoke and tried to give comfort to Ezra’s family, who had flown in from the US to be with us, here, in Gush Etzion. She spoke about how the Jewish people respond to a culture of death and destruction by celebrating life and rebuilding. We at Hub Etzion believe that the response to BDS is the same; rather than divestment and negative attacks, we need to build up and ‘INvest’; in people, in enterprise, in technology and advancements for all of the residents of Gush Etzion. That is the only way to bring about progress and solutions. We face the current situation – and our ongoing situation by increasing prosperity and success – locally and proudly.”

This approach to the current attacks on Israel, from terrorism to the rhetoric on campuses and in cities around the world, seems to resonate a great deal with thought leaders.

During today’s visit, it was clear that MK Oren already understood the Hub culture, and the need for a coworking space in Gush Etzion.

But what he wanted to talk about was the decision of the Hub – and more importantly the businesses that reside there – to remain in Gush Etzion, clearly, unapologetically.

As the coworkers gathered for a photo opportunity with Oren, he addressed the crowd and said (in Hebrew) “People have been trying to remove the Jewish presence from this area throughout the history of Israel. Those of you working here, this amazing place, Hub Etzion, is as important to the long term success here as the soldiers out there working hard at the junction and checkpoints, protecting us”

Hub Etzion was also called out recently at a new Lobby at the Knesset for Startups and Hubs, started by MKs Yoav Kish and Yoel Hasson. MK Kish, of the Likud Party, specifically mentioned Hub Etzion as an example of the “need for more Hubs and tech eco-systems outside of the mercaz [Tel Aviv] and in the rest of the country.”

Alan Weinkrantz, “Product Ambassador” from Rackspace, the world’s largest provider of managed cloud storage, has also brought international attention to Hub Etzion. In a recent post, he wrote that “It’s interesting to see workspaces and hubs like…Hub Etzion that are no more than 30 minutes from Jerusalem, and dot landscape and the periphery of the Nation’s Capital. These communities and workspaces are sort of like being in Fairfax, VA or Chevy Chase, MD, but with a slightly longer time line that go back to the cradle of civilization.”

Coinciding with MK Michael Oren’s visit, Weinkrantz came to Hub Etzion today for a day of consultations and help for the co-working /start-up community of Gush Etzion. He had an opportunity to personally present MK Oren with a Rackspace poster that points an arrow at Israel as “The Five-Thousand Year Old Startup”.

“We are a private enterprise that is focused on empowering the people and businesses of Gush Etzion and Efrat to thrive and grow.” co-owner Amy Shuter told JewishPress.com. “We have so much more to do. We know that as long as our region is an area of controversy we will garner attention to what we are doing. But we are going to help the next huge idea turn into the next huge startup, right out of our modest Hub. This is only the beginning. We hope that the international attention continues, but for the benefit of the businesses we serve. “

Below is a short excerpt (in English) from what MK Michael Oren said during his visit to Hub Etzion. 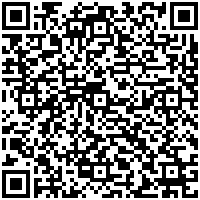