Arab Knesset Member Haneen Zoabi –- the one who sailed with IHH terrorists, said that the kidnap-murderers of three yeshiva boys last June were not terrorists, defends terrorists and calls soldiers ‘Nazis” – is suing Likud Knesset Member Danny Danon for a video showing her in jail with terrorists.

If the lawsuit is judged on the truth of the video content, Zoabi is liable to lose. The judicial system already has rejected her appeal against her being banned from the Knesset for six months because of her unruly behavior and incendiary remarks.


Besides that, the video, as seen below, is cute.

Zoabi doesn’t think so, and her Balad party plans to go the police to charge Danon with incitement, the irony of the year.

Lyrics to the clip are sung to the tune of “Oh Susanna” as the action shows “Sheriff” Danon locking up Zoabi in jail along with Hamas leader Ismail Haniyeh and Azmi Bishara, a former Knesset Member in Zoabi’s Balad party who fled the country  after being indicted for aiding Hezbollah in the Second Lebanon War.

Danon posted the video as part of his campaign against Prime Minister Binyamin Netanyahu in the elections next week for chairman of the Likud party.

After hearing of Zoabi’s lawsuit, Danon said she deserves to be in jail. The public may be behind him, judging by a recent poll showing that 90 percent of the respondents support revoking her citizenship.

The lyrics of the video panning Zoabi include, “There is a limit to every traitor.”

Danon has sponsored the “Zoabi bill” that would allow for a Knesset majority to get rid of an MK who backs a terrorist organization, and he has asked the Elections Committee to bar her from running in the elections.

A similar move in the last elections was rejected.

“Sheriff” Danon is not the only going Hollywood in the elections.

A Jewish Home candidate has produced another silly if not stupid video that is even more childish than the one posted last week on behalf of party chairman Naftali Bennett, disguised as a leftist who apologizes for everything in life, especially when someone else is to blame. He takes off his disguise at the end of the clip and says, “It is time to stop apologizing.”

Now it is the turn of Jewish Home candidate Ronen Shoval, who reached almost as low as Livni did last week when she appeared on a television satirical show and called Prime Minister Binyamin Netanyahu  a “zero” and ”impotent.”

Ronen’s cheap shots were aimed at Livni and Peace Now chairman Yair Oppenheimer, who are depicted in a video as zombies in the forest where. The duet trap a cyclist and are about to kill him when he throws them off balance by throwing them a  copy of the left-wing Haaretz newspaper, which no good leftist can resist from grabbing to read the latest anti-Zionist scoops.

If this video and Livni’s “satire” gutter remarks are a preview of what is in store for us for the next 80-plus days, we are in for a bad movie. 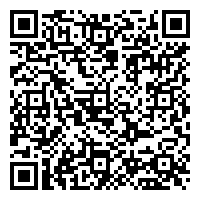