The Food and Drug Administration (FDA) has issued a “study may proceed” letter – not a full-fledged drug approval, but rather, a green light to go ahead with a Phase 2 trial – for two companies to test a drug that could be the answer for about half of the patients battling the COVID-19 coronavirus.

The US-Israeli pharmaceutical firm NeuroRx and the Swiss drug development firm Relief Therapeutics announced Sunday they will launch the trial for Aviptadil (VIP) after filing an Investigational New Drug Application for the trial with the FDA.


Aviptadil is a synthetic form of a neuropeptide hormone that it is hoped will be able to stop ARDS – Acute Respiratory Distress Syndrome — the condition that has killed at least half of those who have died of the COVID-19 coronavirus.

“In a previous trial of VIP for ARDS caused by sepsis, seven out of eight patients on mechanical ventilation showed substantial improvement and six ultimately left the hospital alive,” said Prof. Jonathan Javitt, MD, MPH, the CEO of NeuroRx, Inc. and Vice Chairman nominee of Relief.

“Patients on ventilators for COVID-19 have only a 50 percent chance of survival,” Javitt noted in a statement. “If the early results can be replicated in ARDS caused by COVID-19, this treatment could have a major impact both on COVID-19 survival, and on the availability of ventilators for those in desperate need.

“Should this trial demonstrate efficacy, Relief Therapeutics has sufficient immediately shippable drug substance to treat more than 100,000 Americans,” he added.

The drug works to enable communications between neurons in the central nervous system.

ARDS, a respiratory system failure induced by a rapid and severe lung inflammation characterized by shortness of breath, halts the exchange of oxygen and carbon dioxide in the patient’s lungs. It then forces medical personnel to place the patient on an artificial lung, or ventilator — which sometimes works, and sometimes doesn’t.

Death in COVID-19-infected patients is caused by a “cytokine storm” in the lungs, in which the virus triggers inflammatory molecules called “cytokines” which cause the air sacs (alveolae) of the lungs to fill with water and become impermeable to oxygen, even in the setting of mechanical ventilation.

The drug (Aviptadil) to be tried already has a 20-year history of safe use in human beings in multiple human trials for sarcoidosis, pulmonary fibrosis, and pulmonary hypertension, and is marketed in Europe as a local injection to treat erectile dysfunction.

It was already approved years ago for the treatment of acute lung injury under an “orphan designation” by the European Medicines Agency of the European Commission to mondoBIOTECH Laboratories, Lichtenstein on 28 August 2006.

At this point, the FDA has granted orphan drug status to Relief Therapeutics for the development of Aviptadil (VIP) in ARDS. 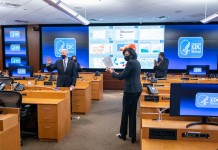